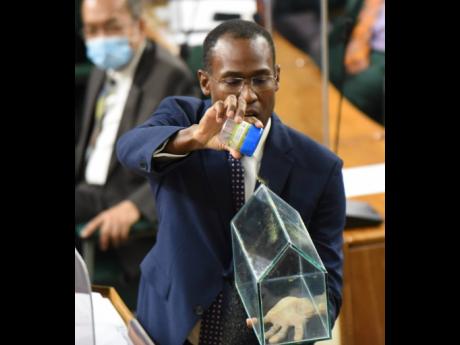 Ian Allen/Photographer
Dr Nigel Clarke, minister of finance and the public service, throws particles on a replica glass house he took to Parliament while making his closing presentation in the Budget Debate on Tuesday. He warned the Opposition “not to throw stones”.

In a high-drama session of Parliament on Tuesday, Finance Minister Dr Nigel Clarke ripped into the Budget presentations of the Opposition, saying they lacked due diligence and were rife with falsehoods.

Clarke took aim especially at Julian Robinson, the opposition spokesman on finance, whom he accused of peddling erroneous information concerning Jamaica’s fiscal spend in response to the COVID-19 pandemic.

The finance minister said that Robinson should have detected errors in an Inter-American Development Bank (IDB) report given that it concerned big-ticket items discussed extensively in Parliament.

The report also did not include the $1.85 billion in laptops in PATH and non-PATH welfare for families.

“The table in the report from which the opposition spokesman quoted was erroneous not by 10 per cent or 20 per cent but the table that he quoted from was wrong by 100 per cent,” Clarke asserted as he read a letter from the IDB acknowledging the error.

In further taking the Opposition to task, Clarke challenged Opposition Leader Mark Golding to answer for the dividends that should have been paid over to the Government by the Bank of Jamaica for earnings on foreign exchange depreciation.

Golding had said the depreciation of the Jamaican dollar was a tax on the poorest Jamaicans and was being used by the central bank to rake in profits.

Between 1989 and 2007, when the People’s National Party (PNP) was in office, there was an average annual depreciation in the value of the Jamaican dollar of 14 per cent per year.

Between 2012 and 2016, when the PNP was again in office, depreciation in the value of the Jamaican dollar was nine per cent per year.

Depreciation was now averaging just over four per cent per year under the Holness administration, said Clarke.

“I want to ask where were the dividends paid over to the people of Jamaica? US$728 million converted today J$ is $107 billion. I want to know ... Where are the dividends?” the finance minister questioned.

He jeered the Opposition as he held up a miniature glass house in Parliament and urged his counterparts “not to throw stones”.

The Government is using $33 billion in dividends from the BOJ to fund a $60-billion social programme.

On rising food prices, about which the Opposition complained bitterly, Clarke again knocked Robinson for presenting what he said were false data to the Parliament.

Robinson had hoisted a chart showing increases of as much as 158 per cent for some basic food items.

But armed with what he said were data from the Consumer Affairs Commission, the finance minister said that Robinson’s 2016 prices were not credible.

“For his first Budget presentation, a keen cricketer in his time, he came hustling down the pitch, with fast bowling action, but sadly pitched the ball wide of the off stump,” Clarke said.

Editor's note: An earlier version of this story cited Robinson claiming increases of 300 per cent. That should have been 158 per cent. We regret the error.