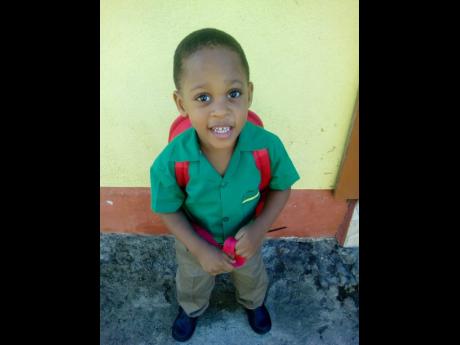 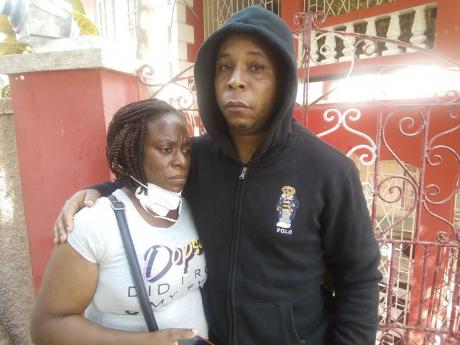 Contributed
Satchell Brown and Gregory Lambert grieve the death of their four-year-old son Omar, who was struck by a car Wednesday night.
1
2

A St James family has been plunged further into mourning as tragedy struck on Wednesday night, claiming the life of a four-year-old boy, who was struck by a car as he tried to cross the road to greet his dad, even while the family made preparations to bury his grandfather today.

The deceased child has been identified as Omar Lionel Lambert, also known as ‘Little Messi’, of Downey Corner in Salt Spring.

Reports by the police are that about 8 p.m. on Wednesday, the child and his mother went to meet his father at a location along the Salt Spring road.

On seeing his father, Gregory Lambert, Omar reportedly pulled free from his mother’s grasp and was running across the road towards him when he was struck by motor vehicle, which was being driven by a 49-year-old labourer of the neighbouring Flower Hill community.

The child, who sustained major injuries to his head and lower body, was rushed to the Cornwall Regional Hospital, where he died while being treated.

When The Gleaner visited the child’s home yesterday, distraught relatives were seen trying to comfort Satchell Brown, the grieving mother.

Brown told The Gleaner that her son had recently lost his grandfather (his father’s dad), and at the time of the incident, his father had just returned home to the community after visiting St Elizabeth, where his father is to be buried today.

“I got a call from his dad, who told me that he was on his way up, and that he was not feeling well, so I should come and help him with the bags,” added Brown, explaining why she and her son had gone to meet his father.

According to Brown, the ill-fated car came upon them suddenly, and when her son was struck, he landed on the bonnet of the car, which continued driving.

She said that when the car finally stopped, community members helped to lift the car off her son, who was badly injured. He was rushed off to the hospital but he died shortly after arrival.

“Him dead pon the eve a him grandfather funeral, pon him uncle birthday, seven months after mi bury mi brother and mi nephew. Why? Why? I guess only God knows best,” wailed Brown.

The driver of the car has since been warned for prosecution by the police, who are investigating the incident.