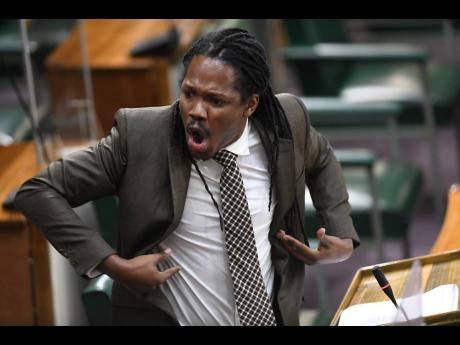 Gladstone Taylor/Multimedia Photo Editor
Opposition Senator Damion Crawford is animated as he addresses the Upper House on Friday. Crawford had argued that people who criticised the prime minister were being arrested, which drew rebuke from government senators. Crawford later withdrew the remark, 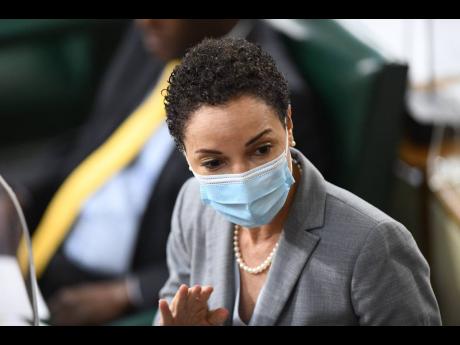 Gladstone Taylor/Multimedia Photo Editor
Senator Kamina Johnson Smith, leader of government business in the Senate, argued that resistance to the changes in the DRMA threatened the Government's ability to rein in breaches of coronavirus safety protocols. 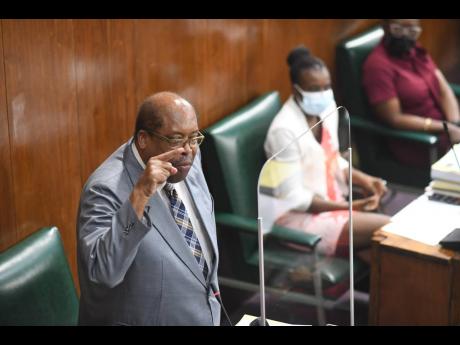 Gladstone Taylor/Multimedia Photo Editor
Charging that the ends did not justify the means, Opposition Senator Lambert Brown characterised as flawed the process of amending the disaster law.
1
2
3

Strenuous attempts by the Opposition to get the Government to delay debate on the Disaster Risk Management (Amendment) Act (DRMA) or to impose parliamentary checks on the prime minister's power were defeated on Friday.

The bill to amend the principal law was passed by the Senate with three amendments.

The legislative change is being pushed in a bid to crack down on behaviour linked to a spiralling two-month wave of coronavirus infection that has seen cases top 37,450. Almost 560 people have died from the virus.

Leader of opposition business in the Senate, Peter Bunting, suggested an amendment to the principal law but it was defeated by a government majority vote of nine nos to seven ayes.

Bunting wanted the existing Section 26 subsection (3) deleted and replaced with a clause that reads: “An order under subsection (2) shall lapse and cease to remain in force 14 days after the day that the order is made, unless the order is approved by affirmative resolution prior to it lapsing, and if so approved, the order shall remain in force until the end of the period specified therein.”

He argued that under the proposed amended law, the prime minister would be given wide powers to make orders for which non-compliance would be a criminal offence.

According to Bunting, the law was first supported on the basis that the breach of the orders was not a criminal offence.

The Opposition later called for a divide on Section 26 subsection (3), which resulted in a vote in favour of the Government. The result was nine ayes as against four nos.

While taking note of the suggestion by Bunting, leader of government business in the Senate, Kamina Johnson Smith, said she could not accept the proposal.

However, she promised to discuss the recommendation with Minister of Local Government and Community Development Desmond McKenzie, who piloted the bill in the Lower House.

She indicated that a decision would be made on the proposal when the bill is sent to the House of Representatives for its final stamp of approval. The Lower House is expected to sign off on the three amendments to the bill on Tuesday.

Even before debate started on the bill Friday, there was extensive deliberations on a motion to suspend the Standing Orders (rules of Parliament) to allow discussion to take place on the amendment to the DRMA Act.

During those deliberations, Opposition Senator Lambert Brown argued that the prime minister had initially committed to refer the bill to a joint select committee for discussion before passing the law. He said that Jamaicans should be given the opportunity to participate in deliberations on the bill before lawmakers made a determination on it.

Brown said that while he supported tough measures to reduce the spread of COVID-19, he described the process towards accomplishing that end as flawed.

Senator Floyd Morris, who is blind, said that he did not receive the amendments to the bill in a format that would allow him to participate meaningfully in the debate. He urged the government side to delay debate on the bill.

Responding to the issues raised by the Opposition, Johnson Smith said that Mark Golding, the opposition leader, had told the prime minister that he did not have to go the route of a joint select committee to review the bill.

She dismissed what she said was a narrative by the parliamentary Opposition to label the prime minister as a dictator. “This narrative is not true,” she said.

Johnson Smith argued that there was nothing oppressive about the legislation, noting that many had criticised the Government for not enforcing stricter measures to encourage compliance with the coronavirus health protocols.

She described the position being taken by the Opposition as “purely political”.