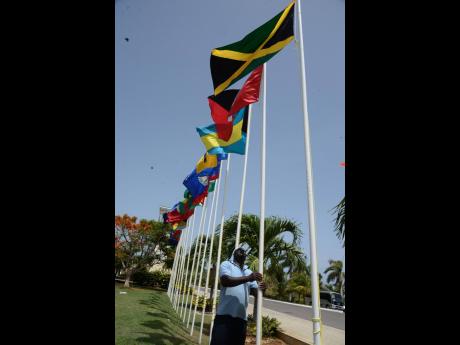 File
Brenton Hilton, groundsman at the Montego Bay Convention Centre in St James, making adjustments to the Jamaican flag in preparation for the CARICOM heads of government meeting on Wednesday, July 4, 2017.

The words on the tombstone telegraph a damning message of despondency, doom and death.

Missing from this dramatic expressing of disgust by Camillo Gonsalves, the minister of finance, economic planning and information technology of Saint Vincent and the Grenadines, are the words, “Gone but not forgotten”, although the tone of the post on his blog suggests these words could easily have been included.

“The idea of CARICOM died on December 16th 2020. The eulogy was delivered on February 25th 2021, in the form of a communiqué that studiously avoided any mention of the decomposing corpse in the middle of our integration movement,” he wrote in his March 8, 2021 blog, titled ‘Every Island for Itself’.

The “decomposing corpse” in Gonsalves’ post is seemingly the dismantling of “the foundation principles of CARICOM – integration, unity, solidarity, coordination”. The target of his frustration are the leaders whom he holds responsible.

More specifically, the Vincentian diplomat points an accusing finger at Jamaica, The Bahamas and Haiti, which supported a “broadside” against Trinidad and Tobago by a representative of Venezuelan opposition politician Juan Guaidó at a meeting of the permanent council of the Organization of American States (OAS) on December 16, 2020.

At that meeting, chaired by Jamaica, the Guaidó representative blamed Port of Spain for the deaths of a boatload of Venezuelan migrants, who perished in Venezuelan waters while trying to make their way to Trinidad. Not only did Jamaica allow a vote condemning the Trinidad government, it, along with the Bahamas and Haiti, voted against the sister CARICOM state, ensuring approval of the measure by one vote.

“ ... With ample opportunity and just cause to save a fellow member state from international censure, CARICOM member states not only declined to come to the aid of one of their own, but explicitly supported the attack,” Gonsalves wrote.

His anger was further fuelled by the fact that a communiqué issued by CARICOM leaders at the end of their meeting in last month made no mention of “the betrayal of Trinidad and Tobago”.

“If heads of government of CARICOM can meet for two days and not frontally confront this shocking breach of unity and solidarity, then the integration movement is soulless and empty,” Gonsalves wrote, ending with: “R.I.P CARICOM. 1973-2020.”

The minister was careful to state that these were his personal views and did not represent the government’s official or unofficial position. However, the silence on the matter of the administration in Kingstown, led by his father, the integrationist, Ralph Gonsalves, is of concern to Crispin Gregoire, a former special adviser to the president of the United Nations (UN) General Assembly and director for the Caribbean at the UN Development Programme.

“When I hear somebody like Minister Gonsalves saying that, it begins to concern me as to the commitment of the CARICOM countries to stay together as a group,” Gregoire, a former Dominican ambassador to the UN, told The Gleaner, adding that the three countries that went against Trinidad had undermined CARICOM solidarity.

“[However], there, you had an element of superpower politics because it’s the United States who speaks [and these] countries were closer ideologically to the [former US President Donald] Trump administration’s ideology and allowed the United States to divide us on that,” he said of the Venezuela issue.

That the three countries threw their support behind Guaidó against Trinidad and Tobago has come as no surprise to Dr Kenny Anthony, the former prime minister of St Lucia. After all, said Anthony, they are either members or strong supporters of the Lima Group, established in August 2017 to restore democracy in Venezuela through a “peaceful and negotiated solution”. The group had the strong backing of the Trump administration, which had been trying to oust the Nicolas Maduro government in Caracas.

“These countries, by their blatant support for Trump on the Venezuelan issue, effectively backed themselves into a diplomatic cul-de-sac. Frankly, the only choice that they had was to abstain and even such a position had its difficulties. It would have meant that their initial position to support Guaidó was, in retrospect, wrong and misguided. That would have been too much of an admission,” the former St Lucian leader told The Sunday Gleaner.

“For my part, I am amazed that a country like Jamaica, with so much diplomatic experience, could have followed the script prescribed by the Trump administration. I am not sure, too, that Jamaica fully understood the complexities in the relationship between Trinidad and Tobago and Venezuela. Trinidad and Tobago has to answer to some rather unique geopolitical pressures and realities, which, ideological reasons apart, made supporting Guaidó suicidal.”

Argentina said last Wednesday that it would withdraw from the Lima Group, criticising the bloc’s policy of isolating Venezuela under Maduro and noting it has “led to nothing”.

The Gleaner reached out to Dr Keith Rowley, the Trinidad and Tobago prime minister and CARICOM chairman, for a comment. A source close to Rowley said: “In the current context, this is not something he’ll want to take on. There is just so much vaccine tension going on in CARICOM right now. This is not something he’d like to broach at a point in time where you can actually put the finger in the wound.”

Differences over foreign policy matters among members of the regional grouping are nothing new, as individual states have tied such matters to their sovereignty.

Back in July 2005, at a meeting of heads of government in Castries, Anthony – worried about the region’s relationship with Africa after sharp differences arose over the Lomé Agreement with the European Union – proposed the appointment of a CARICOM task force to review and redefine the regional grouping’s foreign policy. The idea was vetoed by one prime minister, who insisted his government had the right to determine its foreign policy unfettered by CARICOM.

These disagreements are more pronounced when there are ideological differences between the member states, as was the case with the 1983 US invasion of Grenada, and is the case with Venezuela.

These fissures notwithstanding, the prophets of regional integration reject Gonsalves’ conclusion that the principle of solidarity and the ethos of all for one, and one for all, has died

“The ‘idea’ of CARICOM is not dead. The ‘dream’ of a more perfect union is not lost,” Sir Ronald Sanders, Antigua and Barbuda’s ambassador to the UN and the OAS, told The Gleaner.

“I understand Camillo Gonsalves’ frustration. I share it. But I also know that we cannot pronounce CARICOM dead. Its lifeblood continues to pump in the veins of Caribbean people everywhere, who long for a single region in which they can travel freely on one passport, move to jobs, set up businesses anywhere in the region, just like the people of the 50 states of the United States do. The imperatives of survival rest not in separateness, but in togetherness, where the bounty of the region is shared by all in a truly integrated single area. It does not mean giving up national identity; it means recognising that we can also benefit from a Caribbean identity – just as people from Texas are Texans and Americans; and people from Italy are Italians and Europeans, so, too, we can be Jamaicans, Barbadians, Antiguans and yet be Caribbean,” added Sanders, a long-time advocate of integration and disciple of regionalists such as Sir Alister McIntyre and Sir Shridath Ramphal.

Gregoire, the former UN official, also insists that “the idea of CARICOM is even more relevant now”, stressing that Caribbean countries are too small to go it alone.

“To each his own is a recipe for disaster in this global context. If you don’t belong to a regional bloc as a small island state, you don’t have much of a chance. The only future lies in a regional experiment,” argues the diplomat.

While Gregoire laments the dissension over Venezuela, Anthony and Sanders have refused to accept that this issue will tear the region apart. However, the former prime minister is concerned that some member states might use the health and economic challenges posed by COVID-19 to retreat from regional institution.

“When countries suffer from multiple crises as is the case now, there is the temptation to look inwards, at least initially. It is, too, the perfect environment for opportunistic behaviour,” he told The Gleaner. “Part of the problem is that there is really no towering leader in the region at this time, no prime minister who captures the collective imagination of the people of the region. Of course, there are prime ministers in the region who are admired, but not necessarily for their regional credentials. Those who at one time were at the forefront of regional leadership appear to have retreated, possibly feeling distressed and battered by the failure of some regional initiatives. The temptation to ‘isolationism’ has to be resisted at all cost. CARICOM usually makes advances when the chemistry among regional leaders is real, shared and sincere. This is certainly not the case at this time.”

To Sanders, there’s an issue of dependency, with some countries relying on Caracas for oil while others look to the US and Canada for aid, markets, and help with borrowing.

“When CARICOM countries recognise that they could be less dependent on external forces and less obliged if they pool their resources and their sovereignty, they will be more independent and, therefore, more able to maintain the unity of purpose that they need,” said Sanders.

Acknowledging the need to integrate their markets in order to become more competitive, and successes such as the Caribbean Court of Justice, could ultimately be what keeps CARICOM together, the experts agree, re-emphasising their positions that CARICOM, or its ideals, isn’t dead.

“What the region needs is a unified region that will create a free trade area, a single market and harmonised foreign policy,” said Gregoire. “This is what I see futuristically.”