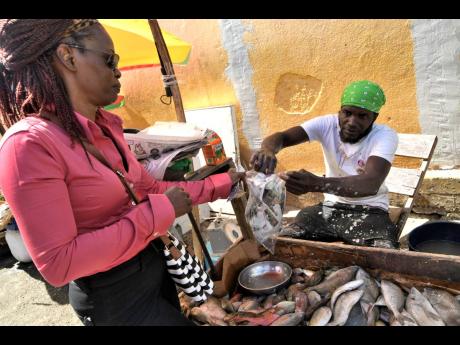 With tens of thousands of workers pushed on to the unemployment line by COVID-19’s economic crunch, vendors at the Princess Market in Spanish Town said that their already dwindling sales will be further eroded by the weekend lockdowns.

The lockdowns, which will run from March 26 to April 12, are geared at slowing the spread of COVID-19.

The 40-day Lent and Easter periods are the holiest seasons on the Christian calendar, during which many observants limit comfort food, curb the appetite for meat, and consume more fish.

But fisherfolk expect fewer consumers to take the bait this year. The lockdowns, they say, will be punishing.

“This thing will hurt we badly, as this is the time of year that we sell the most fish. One, we already have less customers, as nuff people not working, plus the early lockdown on the weekend will definitely cripple the business,” Agustus Fowler said.

Cleveland Alphanso Smith, who sought to tap moderate sales in the lead-up to the first in the series of lockdowns, was philosophical about the crisis. He drew on divine inspiration to insulate him from the domino effect on his business.

“I trust in God, therefore mi can smile at the storm, so if dem (the Government) want we stop early, we have to. I know that this is the time that people want fish. The lockdown will hurt, but we have to work with it,” Smith said.

Meanwhile, Marcus Angus was forthright in declaring his views on the State’s measures in trying to rein in the pandemic.

“This lockdown is too early for the vendors who sell fish. Dem could give we until 3 o’clock. Di midday lockdown will cause us to lose money,”Angus said.

Fowler said that profits on fish were already slim. He disclosed that vendors might make $50 profit after purchasing fish for $600 per pound. Fishers are exempt from the movement ban during the lockdown, but their clients won’t be.

Jamaica, as at Saturday, recorded more than 38,200 infections and 570 deaths.

Charmaine King, a regular shopper in the Princess Market, has little faith in the viability of, or wisdom behind, the lockdowns.

“I believe that there needs to be a better way to deal with the spread of the virus. If you allow us during the week, then the weekend won’t make a difference. I think social distance and proper enforcement is better,” King told The Gleaner.

King said she has been forced to rejig her shopping schedule. So, too, has Victoria Facey.

“I am a firm supporter of law and order, therefore I will have to abide, despite the inconveniences that may be caused. I have just readjusted my shopping routine and worked to deal with the COVID-19 problems,” Facey said.

Meanwhile, market manager at the St Catherine Municipal Corporation, Vincent Warmington, said that while the local government organisation empathised with the vendors, the authorities were committed to enforcing the law.