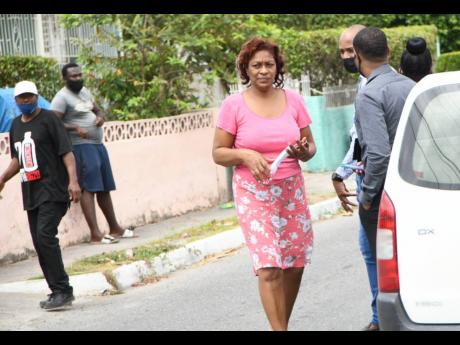 Rudolph Brown/Photographer
Eunice Chambers, mother of Khanice Jackson, is seen outside her Independence City home shortly after learning of her daughter’s murder.

The family of Khanice Jackson said they will not accept any sentence less than the death penalty if the suspect who has reportedly confessed to the murder of the 20-year-old is found guilty.

Speaking on behalf of the family, Kevon Williams, boyfriend of the deceased woman, told The Gleaner that the evidence against Robert Fowler appears to be overwhelming.

“We should not allow guilty persons to manipulate the system by using high-profile lawyers to solicit plea bargains on their behalf so as to get reduced sentences,” Williams stated.

“If all the evidence stock up against this individual, he should not be spared the death penalty, and from what we are hearing there are mountains of physical evidence to proceed to a trial,” he added.

“We certainly would not want another young promising young lady like my late daughter to be victimised in this vicious fashion,” she said on Tuesday.

Deputy Commissioner of Police Fitz Bailey disclosed that Fowler, a 50-year-old mechanic, was charged on Tuesday after giving a caution statement that was recorded in the presence of his attorney.

Bailey said the investigation uncovered several pieces of physical evidence including a handbag, a bank card, and other items believed to be the property of the victim.

A chamois is also reported as being critical to the investigation.

Bailey said that the accused led the police to a number of locations in Portmore where he allegedly attempted to dump the body before changing his mind.

The findings of a post-mortem will determine if additional charges will be preferred.

He is expected to appear in court on April 9.

Jackson was reported missing after failing to turn up for work on March 24. Two days later, her body, with the hands and feet bound, was discovered along Dyke Road in Portmore.