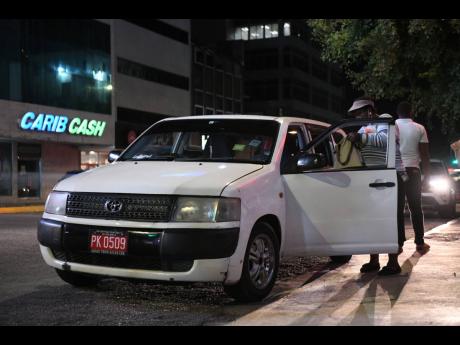 Gladstone Taylor/Multimedia Photo Editor
A taxi operator picks up passengers on Knutsford Boulevard in New Kingston on Tuesday. With reports of ride-share service Uber seeking to enter the local market, taxi operators may face stiff competition in the future.

Silicon Valley-based Uber Technologies has announced plans to enter Kingston with its services. Uber sent out notifications to potential operators on Monday for persons to register as drivers. The company operates what it describes as a ride-...

Silicon Valley-based Uber Technologies has announced plans to enter Kingston with its services.

Uber sent out notifications to potential operators on Monday for persons to register as drivers. The company operates what it describes as a ride-sharing application and food-delivery service. Drivers sign up to provide routes for potential riders who pay using the application.

“We are celebrating that we are reaching more and more countries around the world. This time, Jamaica. Soon, Uber’s app will be available in Kingston and you will have a new alternative to earn moving around the city,” stated the mailed Uber notice that originated from the domain uber@uber.com.

Uber said that interested drivers must be 21 years of age or older, have a 2010 or newer model-year vehicle, and present a valid driver’s licence, registration, and insurance.

The timeline for starting remained undisclosed.

“Soon you will be able to earn with the world’s safest platform, just like millions of people around the world,” stated the notice.

The Gleaner opened the app, but it still showed that the service was “unavailable” in Jamaica. Calls and messages to Robert Montague, minister of transport, and also to the Ministry of Transport, went unreturned up to press time.

Montague had warned local transport operators that they should prepare for the possible entry of Uber.

“Uber must look at the Jamaican industry and say, ‘No. I don’t think I can survive down there’,” Montague said in 2018.

Uber, based in the affluent United States city of San Francisco, offers its services to more than “10,000 cities” globally. It operates with 22,800 full-time employees.

There are also local start-ups that are already gaining ground.

The pandemic, with its lockdowns and concerns of contagion, brought many of these formerly fringe services towards the mainstream, especially in the realm of food delivery. Food delivery remains the fastest growth area for Uber, with ride-sharing affected by stay-at-home orders and contagion fears.

“Uber’ business model was tried in Jamaica and Trinidad before, but the model could not work based on local taxi services, insurance, and tax regulations. These things have not changed,” said Aldo Antonio, principal at Blackslate Holdings, the majority owner of Redplate service.

Uber launched in Trinidad and Tobago in 2017 but quietly ended its activities in that republic shortly thereafter.

Antonio said that investors earlier scouted Jamaica for the possibility of launching Uber by way of an investor.

Queries directed to Uber’s local representative were not unanswered up to press time.

Uber is the largest listed ride and delivery service of its kind in the world. The shareholders in Uber, listed on the Nasdaq exchange in the US, hold a combined US$99.2 billion or about J$15,000 billion (J$15 quadrillion) worth of shares up to Monday.

The company continues to fuel its expansion with heavy cash injections. Uber held US$7.4 billion in cash up to December 2020 due, in part, to the issuance of notes.

This aided in buffering its heavy cash burn at US$3.3 billion in negative cash flow to fuel its rapidly growing operations.