Deportee flees abusive relationship to live on the streets 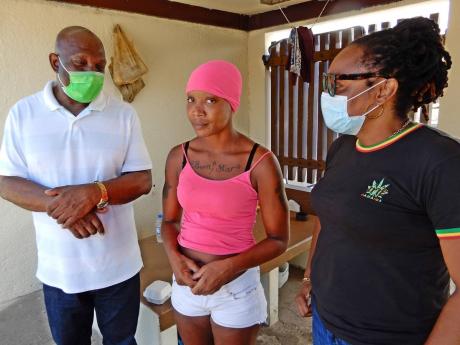 PHOTO BY CARL GILCHRIST
Simone Williams (centre) shares some of her life experiences with St Ann's Bay Mayor Sydney Stewart (left) and Councillor Genevor Gordon-Bailey on Good Friday. Williams was one of approximately 70 persons the St Ann Municipal Corporation has targeted for feeding over the Easter weekend lockdown.

A 33-year-old woman who has been living on the streets of Ocho Rios for the past two years after fleeing an abusive relationship is desperate for help to overcome substance abuse and to turn over a new leaf.

Simone Williams, who said she was deported from the United States after being caught with drugs, was one of around 70 persons the St Ann Municipal Corporation fed during the Easter weekend lockdown.

On Good Friday, after receiving a hearty lunch of fried chicken, rice and peas, vegetables, pasta and juice, Williams retraced her tough journey on the road to redemption.

“I am currently on the streets because life gimme lemon. Mi nuh have nowhere else, since I’ve been deported really. And I was being abused by my boyfriend so mi jus’ walk out and choose the streets,” Williams told The Gleaner.

When Williams was deported, she lived with her boyfriend in Exchange, St Ann, for some time but alleged that she was being abused. She did not report the experience to the police but took refuge on the streets. But that decision has made her even more vulnerable to exploitation.

“I’m a commercial sex worker,” she said of her only means of survival.

“It’s more comfortable than being abused.”

That dilemma has been a point of concern for many anti-deportation lobbyists who charge that both sending and receiving nations put many returnees in grave danger of recidivism or engagement in socially risky behaviours.

Some deportees have tenuous familial or other ties to Jamaica. Some have none at all.

That absence of support and a programme of reintegration prompted the United Kingdom government to propose construction of a state-of-the-art prison here, with the caveat that Jamaican inmates would be transferred to Kingston for the last months of their sentences. The facility would have had a price tag of 25 million pounds.

But the Simpson Miller government did not accept the 2015 offer by the Cameron administration. The ruling Jamaica Labour Party Government has taken a similar stance.

With exasperation etched on her face, Williams admitted to still struggling with her drug problem.

“Mi don’t have a choice. Mi try, all mi try get help, but everybody turn mi down, basically,” Williams told The Gleaner.

Having initially declined help if it was coming from the Poor Relief Department, Williams later explained that this was because she believes she such help would be restrictive.

Personnel from the St Ann Municipal Corporation said they would return to speak to her to see how they could assist her.

Family is almost non-existent, said Williams, pointing out that she has a 19-year-old son in America and a “so-called” sister in Jamaica but nobody is trying to help her.