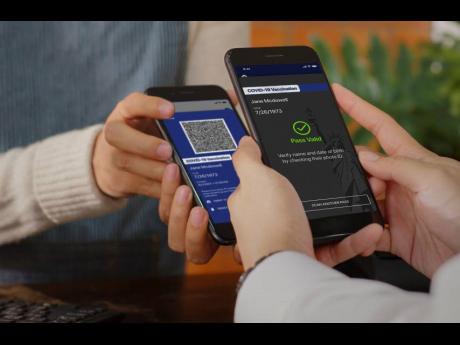 AP
In this undated photo, provided by NY Governor’s Press Office on Saturday March 27, 2021, is the new Excelsior Pass app, a digital pass that people can download to show proof of vaccination or a negative COVID-19 test. 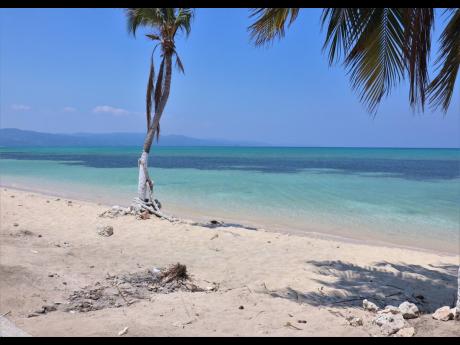 File
An empty beach in Montego Bay, which was usually populated by tourists before the pandemic. 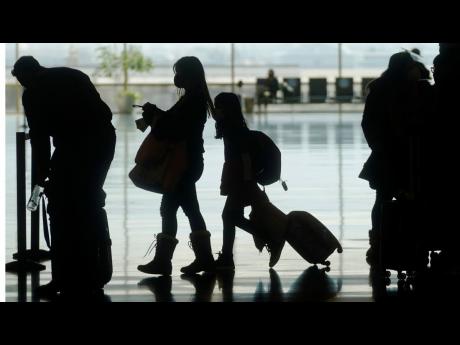 Elysa Leonard, 54, a scuba diver from Virginia in the United States, has not travelled in over a year. When the coronavirus pandemic shut down global economies last year – with travel and tourism among the worst hit – Leonard was preparing to fly to the Caribbean to engage in coral restoration in Bonaire with the charity Aquarium Divers for Corals.

Now, having had her first shot of the Moderna vaccine, and with the second jab scheduled for April 21, Leonard can’t wait to fly again.

“I am dying to travel,” she told The Gleaner.

Leonard is scheduled to leave for Bonaire late next month, and although it will take a high degree of aviation gymnastics to get there, including a flight to Curaçao, she’s determined to take to the skies as soon as it’s possible.

“I will go, come hell or high water,” she stressed, undeterred by the multiple COVID-19 tests she must undergo. However, there’s one travel condition that would have been worse than hell or high water: quarantine.

“I would have to think twice about doing a trip if they required that, just because you only have so much time to be on vacation or take a break from your job. And, so, if you have to tack on those days of quarantine, that really hinders things,” said Leonard, who listed Jamaica as one of her favourite places to dive. “I think I would probably have waited because I simply don’t have the time or the extra money to do it.”

The sentiments are similar from virtually everyone with whom The Gleaner spoke, including potential visitors, journalists, senior Caribbean tourism officials and travel advisers who sell holidays to the region – such as Akeela Hossain of Travelpoint Enterprises Incin Stouffville, Ontario, Canada.

“I don’t think it’s necessary once they’re fully vaccinated … . I don’t think they should continue with that, wanting people to quarantine at all,” Hossain told The Gleaner from her home in Markham, just north of Toronto. “I wouldn’t [visit] and I don’t agree with it because it’s very costly on people. It’s stressful and it’s costly. It’s not fair on the people. Have your proof of vaccination attached to your passport and that should be good enough to let them go and enjoy their holiday. No other quarantine or anything needed. It’s silly.”

The issue surrounding quarantine requirements for fully immunised travellers has become a major subject of discussion in recent weeks as the US and Britain, in particular, escalate their vaccination programmes. In the US, 102 million people – nearly 31 per cent of the population – have had at least one dose, with 58 million – 17.5 per cent – fully vaccinated against COVID-19, according to data from the Centers for Disease Control and Prevention (CDC). In the UK, over 31 million people – 46 per cent of the population – have received at least one dose, with 4.9 million fully vaccinated, according to the latest figures from Public Health England.

The roll-out of vaccines across the US has coincided with a “dramatic” increase in bookings for the summer, statistics shared with The Gleaner by Adara, the global data firm, show.

The figures revealed that domestic trips booked between January 1 and March 19 for travel between June 1 and September 15 jumped nearly sixfold, while international trips booked for travel during the same period registered a fourfold increase, with Mexico being the top choice, followed by the UK, Dominican Republic, the US Virgin Islands, Jamaica, Aruba, Costa Rica, Italy, Spain and The Bahamas.

“Travellers are heading south for their summer beach vacations,” declares Adara, based on its findings.

This is encouraging news for a Caribbean tourism industry that suffered a 65.5 per cent decline in stayover arrivals last year, which resulted in tourism spend plummeting by 60 to 80 per cent. At the same time, it forces the authorities to determine whether travellers who have been fully vaccinated should be exempt from quarantine requirements.

So far, they continue to hold firm to the status quo, supported by the Caribbean Public Health Agency (CARPHA).

In a paper dated March 15, which contains a series of recommendations on the matter, CARPHA acknowledges the region’s dependence on tourism, but points out that the sector and “the porous borders and interconnectedness” of Caribbean Community (CARICOM) countries increase the risk of importing COVID-19.

It states that while some countries have begun vaccination programmes, the vaccines have “not yet been definitively proven” to stop transmission of the virus.

“It is too early – with the current data – to determine that a vaccinated person should not be quarantined and, therefore, [CARPHA] cannot recommend the cessation of quarantine for fully vaccinated persons coming to the Caribbean,” the health watchdog insists in the paper, a copy of which was obtained by The Gleaner.

“Quarantine measures are to be maintained until additional data demonstrate that vaccinations will stop transmission, and that vaccination coverage is [greater than] 70 per cent in populations towards safely acquiring herd immunity,” it continues, while stressing the need for a negative COVID-19 PCR test taken 48 to 72 hours before entry, with a second test after seven to 10 days of quarantine, along with the remaining protocols such as the wearing of masks in public and social distancing.

These recommendations, which heads of government have yet to consider, according to a source familiar with the talks, were made before the CDC announced last week that under real-world conditions, the Pfizer and Moderna vaccines – which, along with the single-dose Johnson & Johnson are the vaccines approved for use in the US – provide highly effective protection.

The CARPHA recommendations also preceded the CDC’s announcement on April 2 that Americans who are fully vaccinated can now travel both domestically and internationally since they are less likely to get and spread COVID-19, but they must continue to take precautions like wearing a mask in public to avoid possibly spreading the virus to others.

Fully vaccinated travellers do not need to get tested before or after travel unless their destination requires it, and they do not need to self-quarantine, the CDC said.

Proof of vaccination as alternative to testing, quarantine

Already, a small but growing number of tourist destinations have announced proof of vaccination as an alternative to testing and quarantine requirements.

They include the Mediterranean island of Malta, the Thai island of Phuket, the Baltic state of Estonia, the South American country Ecuador and its territory, the Galápagos Islands, Guatemala, Greece, Cyprus, Iceland, Romania, Portugal and Poland.

In the Caribbean, the tiny Dutch territory of St Eustatius has said that as of April 11, its residents who are fully vaccinated will no longer have to go into quarantine when they return to the country from visits abroad. Belize has also announced that vaccinated travellers now need only to present a vaccination record card, with full inoculation completed at least two weeks before their arrival into the country.

This is likely to increase pressure on the tourism-dependent Caribbean destinations to similarly ease the restrictions on fully vaccinated travellers, several industry experts told The Gleaner.

Among those in support is Clifton Reader, the Jamaica Hotel and Tourist Association president, who told The Gleaner that while the entry requirement of a negative COVID-19 test, as well protocols such as mask wearing, physical distancing and sanitisation should remain in place, fully vaccinated travellers should not spend any time in quarantine.

“Countries which require guests to quarantine in their hotel may experience reduced numbers of visitors since persons usually want to explore and have varied experiences. Thankfully, in Jamaica, we have quarantine procedures along the resilient corridor, which boasts accommodations and attractions that guests can have access to for a full experience,” Reader explained. “However, it would be so much better if there was no quarantine for fully vaccinated guests.”

In making its case to maintain strict quarantine requirements, CARPHA, which recommends a “full 14-day quarantining”, argues that outside of the British overseas territories, few among the Caribbean population have been vaccinated. It also points out that variants of the virus are present in the region and “despite the deployment of numerous vaccines around the globe and in light of the continued proliferation of existing and new variants”, the World Health Organization has not recommended halting quarantine measures.

Colin Pegler, the managing director of the UK-based hotel and destination representation company, Resort Marketing International, is all for keeping the requirement of a negative test – although he’d prefer a rapid test upon entry – and the remaining protocols.

However, as far as Pegler is concerned, insisting on placing fully vaccinated travellers in quarantine is a bad idea.

“That will kill business. It’s that simple,” he told The Gleaner, while explaining that this requirement would push tourists to destinations with fewer restrictions that make it easier to visit.

According to Pegler, whose firm’s $100-million portfolio includes properties in seven Caribbean destinations, it “just doesn’t make any sense” for any destination in the Caribbean – where the British visitor spends an average of 10 days on holiday – to force fully vaccinated holidaymakers to spend half of their stay in quarantine.

“If you’ve got to spend 50 per cent of [your 10-day holiday] locked in a hotel room, eating takeaway food, why on earth would anybody do it?,” reasoned Pegler. “That’s 50 per cent of their holiday effectively ruined. It’s simply not going to work.”