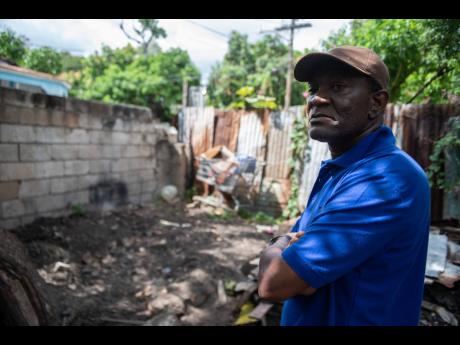 Gladstone Taylor/Multimedia Photo Editor
Errol Green, brother of the late Millicent Robinson, speaking with The Gleaner on Sunday near the spot where Robinson's body was found a day earlier. Green was involved in the exhumation. 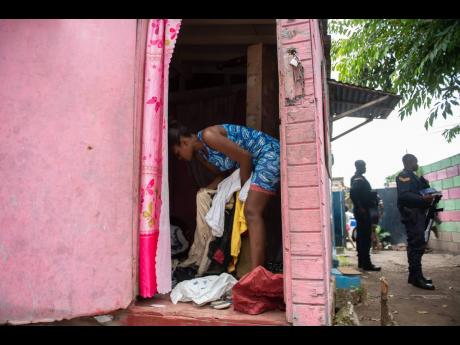 Gladstone Taylor/Multimedia Photo Editor
Keisha Francis removes the belongings of her late mother, Millicent Robinson, who had been missing for almost a week, on Sunday. The family’s search came to an end on Saturday, April 3 when Robinson's body was found in a shallow grave beneath a mango tree a few metres from her home. 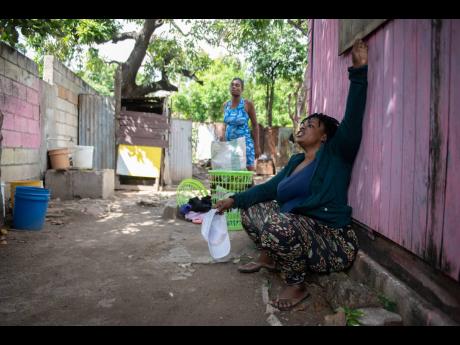 Errol Green is relieved that his mother is already dead. Had she not been, he believes that news of the discovery of his sister Millicent Robinson's body in a shallow grave would have sent her over the edge. Green...

Errol Green is relieved that his mother is already dead. Had she not been, he believes that news of the discovery of his sister Millicent Robinson's body in a shallow grave would have sent her over the edge.

Green disclosed that it was he who, on Saturday, April 3, started to dig an area of the yard of the multi-dwelling house where Robinson, 50, lived - six days after she vanished without a trace.

He was prompted by another family member who had been suspicious that junk had been piled up at the spot - shaded by a mango tree - that hadn't been there before.

“When me start digging, me see what appears to be a body coming up. We could make out the heel, we could see that there is a head and a hip. From there, the police said we should stop now,” Green told The Gleaner on Sunday on Benbow Street in Craig Town, St Andrew, where his sister, affectionately called 'Millie', lived.

“For the first minute or two, I didn’t feel like I was myself. [But] even when the policeman asked me if me sure me can manage it, me tell him yes. It is very, very hard,” Green stated as he told of the emotional turmoil the family had suffered the past week.

There was uproar in the yard on Sunday afternoon with a cousin of Robinson's openly accused another family of being responsible for the death.

Denise Burrell was angry as she theorised that Robinson lost her life because her killers were after the board house structure she lived in.

“You see when dem gag her mouth … it looked like dem lick her first and realised what happen ... . Them bury her right up there so. There is no reason whatsoever to get up and kill my cousin,” Burrell told The Gleaner, declaring she was fearless and would not be silenced.

One person has been taken into custody for questioning, The Gleaner understands.

But Burrell believes that there was more than one participant in the killing.

“It is a Sunday; it is a no-walking day. Nobody at all would enter from a next community to this community because you will get lock up,” she further stated, contending that the killers could not have been outsiders.

The "no-walking day" to which she referred was the hard coronavirus lockdown imposed by the Government at noon on March 27 and which was lifted at 5 a.m. March 29. Robinson had gone missing on March 28, relatives say, although it appears that a formal report to the Admiral Town Police Station was made two days later.

Craig Town is located in the Kingston Western Police Division, which has recorded a 45 per cent rise in murders up to March 30.

Twenty-nine people were killed between January 1 and March 30, nine more than for the corresponding period in 2020.

Amid the shouting on Sunday, Keisha Francis, Robinson's daughter, picked through the belongs her mother left behind.

But a neighbour protested.

As a crowd gathered, some whispered about the events that have brought their community under an ignominious spotlight, while others openly condemned the killing.

“She is a very nice lady. She nuh trouble nobody. Millie … nuh trouble a soul. Dem only bad-mind her fi the piece a house,” one neighbour told The Gleaner.

"Millie get a horrible death and all now me can't sleep," she added.

Another resident said that the soft-spoken Robinson was well known throughout the community.

“It rough. Dem kill gunman and dig hole bury dem all the time in the community here. But it is first dem a kill woman and bury here in the community,” a 67-year-old neighbour, who requested anonymity, quietly told The Gleaner on Sunday.

Under the watchful eye of police personnel monitoring Sunday’s lockdown, another neighbour shouted, “Repent!” repeatedly as she wept openly over the killing of Robinson.