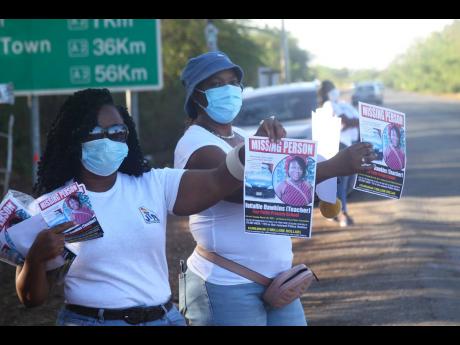 Nathaniel Stewart/Photographer
Teachers distribute flyers bearing the image of missing schoolteacher Nattalie Dawkins at the Woodleigh roundabout near the entrance to Highway 2000 on Saturday, April 3. A search spanning Clarendon and St Catherine is on in earnest.

A team of teachers combined forces with the police and the Canine Division as the search for missing schoolteacher Nattalie Dawkins intensified on Sunday.

The team combed through several communities in Clarendon, but could not locate the missing educator or any substantial evidence.

Dawkins has been missing since March 30.

The family is clinging to hope that the 44-year-old primary-school teacher will be found alive.

Dawkins' brother, Garfield Campbell, told The Gleaner that he strongly believes his sister is still being held hostage.

"Me hold that from day one and me nah let it go. Me just feel say them hold her somewhere, but I don't know of her to have any problem with anybody," he said.

Campbell said though the family has been traumatised, they remain fervent in the hope of finding Dawkins.

"We just come off one search and we a go on another one," he said on Sunday, following an expedition in the community of Chateau in the parish.

Campbell said that the family was awaiting clues from a crucial piece of evidence which he believes can unearth answers into the teacher's disappearance.

Two men who were in possession of the vehicle reportedly challenged the police in a shoot-out. One man was fatally shot and the other escaped. The men were attempting to the sell the vehicle, the police said.

The men are reportedly from Chateau in Clarendon and have been on the police radar.

He noted that the men have eluded police dragnets over the years and fled the parish recently after a recent murder.

The police theorise that the men sought refuge among relatives in Bellas Gate, St Catherine.

According to Brown, the police have not been able to determine the motive behind the educator's disappearance but are following strong leads.