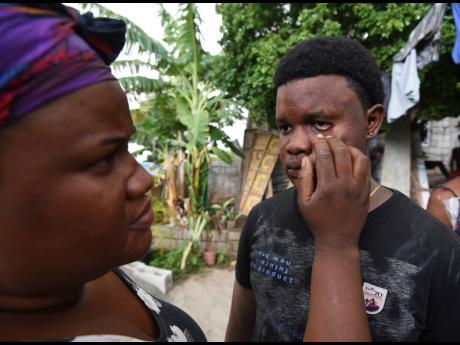 Ian Allen/Photographer
Karen Reid says her son Yvonic Bailey is totally blind in his left eye and is fast losing sight in his right.

“Sometimes I don’t even sleep at nights,” said Yvonic, who is already totally blind in the left eye and is now losing sight in the right.

Bailey’s vision problems began when he was two years old, and at age five, he lost sight in the left eye.

Karen Reid, Yvonic’s mother, believes that her son’s problems stem from an incorrect diagnosis of being HIV-positive, for which she was given treatment, during a visit to the antenatal clinic.

Reid filed a negligence suit arising from the wrongful diagnosis and the Government accepted liability.

She believes that it was the medication that affected her son’s sight, but she has not received expert opinion on the matter.

‘My son was born prematurely at eight months and his eyes were not tested at birth. When he was two years old, I noticed that his left eye was very glassy, and I took him to a clinic and was subsequently given a referral to the Bustamante children’s hospital,” she said.

Since then, Reid has taken her son to several ophthalmologists and has been advised that he should wear highly customised glasses. But his sight is deteriorating fast, his mother said.

Reid told The Gleaner that it pains her heart to see her son in such a helpless state.

“I just cannot see to read, and I have severe pain in my right eye. I keep asking myself why this is happening to me, and I would really like to know the reason why my eyes have been affected,” he told The Gleaner.

“Although I am to wear special glasses, the pair I had fell and broke three years ago, and since then, I have been without one because it is very expensive and my mother cannot afford to replace it.”

Yvonic struggles with the embarrassment of having to explain his vision woes to curious onlookers and confesses that every day he wonders how much longer he can continue.

Sports, especially football, have always been a passion for the teenager, who cannot participate in, or even watch, a game on television because the glare affects his vision.

“Help! Help! I really need some help to relieve my suffering and fear,” Yvonic said tearfully.

The 15-year-old has always wanted to join the army but said that that dream is no longer viable.

“That is no longer realistic because a blind person cannot be a soldier,” he said.