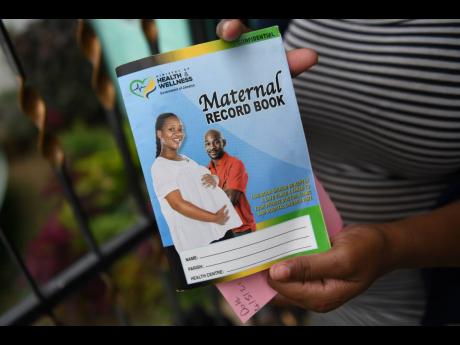 Gladstone Taylor/Multimedia Photo Editor
Mrs Bartley displays her maternal record book received from the University Hospital of the West Indies. She alleges that her newborn died because of the negligence of hospital staff during childbirth.

A teacher-soldier couple living in Portmore, St Catherine, is heartbroken, accusing nurses at the University Hospital of the West Indies (UHWI) of shoving their dead baby into their arms to bond.

David Bartley and his wife believe that if more urgency had been placed on her pleas to nurses on the maternity ward, her baby might have been saved.

The hospital has also been blamed for not being sufficiently prepared for a pregnancy medical staff knew was high-risk.

Mrs Bartley, who has requested that her forename not be published, said she had been visiting the hospital’s antenatal clinic.

At 21 weeks pregnant, she started spotting and journeyed to the St Andrew-based facility on March 23.

Her ordeal started some time after 4 p.m. that day when she realised she was in need of emergency intervention.

No doctor came until an hour later, she said.

“I was feeling some pain I have never felt before. She came back in the room and she told me that I was having anxiety attack. I said, ‘Imagine! Unnu put me inside here so fi dead! No doctor! Nobody! And each time I call, you tell me it’s anxiety attack,’” the schoolteacher recounted.

She would eventually get an injection on her right foot, which she was reportedly told would alleviate her pain.

Mrs Bartley said that on March 24, the pain worsened, prompting her to cry out.

“They started asking for the oxygen. When they came in, nothing! Same time, I told her I was feeling pressure between my legs. She said it was anxiety again and told me to close my legs.

“I told her, ‘Look!’ And at that point it seems the baby was there. Same time another nurse came in and when I opened my legs, the nurse start crying and saying, ‘Baby! Baby! Baby! Baby!’”

Mrs Bartley said that when the doctor approached, he discovered that the support staff did not have any kits, suggesting they were unprepared for her case despite having her file.

She further alleged that after the baby was birthed, no effort was made to administer oxygen because the personnel were unprepared.

“They took the baby for about 20 minutes and when they come back, they bring the dead baby come in the room and have the audacity to tell me to bond with the dead baby. How inhumane that is?”

“The baby lose her life, which I can understand, but guess what? ... You didn’t try! And she born with a pulse,” Mrs Bartley lamented.

They said the baby’s face had turned black.

David Bartley said while he was trying to enquire about his wife’s situation, another nurse coarsely told him that the baby was born prematurely.

Director of patient affairs at the UHWI, Janet Powell, appeared surprised at the disclosure.

They eventually left the hospital on March 25, Mr Bartley’s birthday, but with no baby in hand.

“When we asked them what they going to do with the baby, they said they are going to keep it for research,” Mr Bartley said he was told.

Powell told The Gleaner that the couple might have been misinformed as The University of the West Indies, and not the hospital, does research.

Further, Powell contended, there is a grey area in the law on how hospitals should treat cases where the foetus is younger than 22 weeks.

“When a mother is pregnant and the pregnancy is over 22 weeks and the child is over 500 grams, that child is regarded as a stillborn. It is registerable and they will get a stillbirth certificate. If they want, they can use that to do the burial,” the hospital administrator stated, underscoring that the threshold was a World Health Organization standard.

But the Registration (Births and Deaths) Act gives a higher threshold of 28 weeks old before the body can be registered as a human being.

“What we have been doing is using our discretion, depending on who we are dealing with, because here is this gap. So if the mother wants – and there is a proper arrangement – we would normally give it to the funeral home for them to do what they want,” said Powell.

The couple are especially distraught because they feel let down by the standard of service offered to them as public-sector workers who have given their lives to the country.

“I render a service on a daily service – and the passion that I have for the service that I give – and to know that you are working in the public sector ..., I really feel betrayed,” Mrs Bartley told The Gleaner.

The UHWI has been scarred by several accusations of mistreatment over the past year, involving the deaths of Jodian Fearon and Jalisa McGowan.

Fearon, a first-time mom, died at the UHWI in April 2020, six hours after delivering her baby at the Spanish Town Hospital in St Catherine.

After a C-section delivery, Fearon’s health deteriorated and she was rushed to the UHWI for further treatment, where she succumbed hours later. The 24-year-old was reportedly found dead on the hospital floor.

McGowan, 17, was allegedly denied treatment for nearly two hours at the UHWI on February 26 this year before being taken to Andrews Memorial Hospital, where she was pronounced dead. It is believed that the hands-off approach was linked to paranoia over coronavirus infection.

McGowan was an asthmatic.

Neither the hospital nor the Ministry of Health and Wellness has published the findings of a report completed weeks ago.