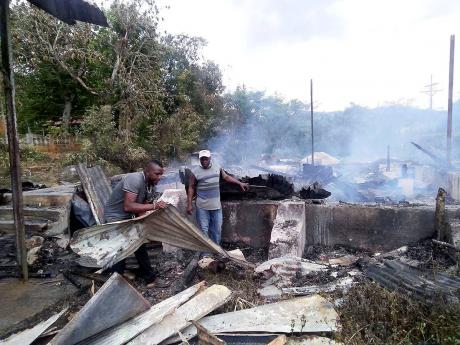 Fire destroyed the iconic 129-year-old Railway Corporation Train Station building in Balaclava, St Elizabeth, on Wednesday morning, wrecking the livelihoods of the persons who were using it as a furniture shop.

The Balaclava police reported being alerted to the fire shortly after 1:00 a.m., and the Santa Cruz Fire Department was immediately summoned. When the firefighters arrived at the location, the building was totally consumed by the fire.

“We responded with one unit from the Santa Cruz Fire Department, but on reaching the location, the building, which is constructed of board and a concrete base, was engulfed in flames,” a firefighter told The Gleaner.

Preliminary investigations indicate that the cause of the fire was inconclusive.

However, residents strongly theorise that arsonists are at fault.

Desmond Salmon, manager of the furniture shop, indicated that he, too, believes that the fire was deliberately set.

Salmon said the historical building was contracted to him by the Railway Corporation 15 years ago to house his furniture and carpentry shop.

“We have lost all our lifelong savings, which were tied up in our business, and the shop was equipped with various power tools, expensive furniture, expensive lumber, and other materials,” said Salmon.

“We have lost several pieces of commercial tools valued at hundreds of thousands of dollars, and cabinet sets valued at over $700,000 each.”

According to Salmon, the building had three separate work areas.

“I was at home with my family at about 2:00 a.m. this morning, and I got a call that the place is under fire. When we came out here, nothing could save, nothing at all,” said Salmon.

Salmon estimates the damage at no less than $30 million. The building was reportedly not insured.

“It is a bad day, a sad day, because the furniture we make is for persons and businesses all over, and we also provide many jobs in the community,” he said.