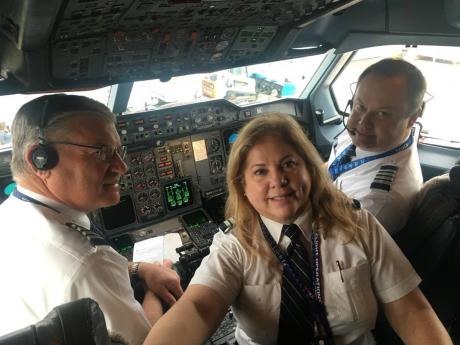 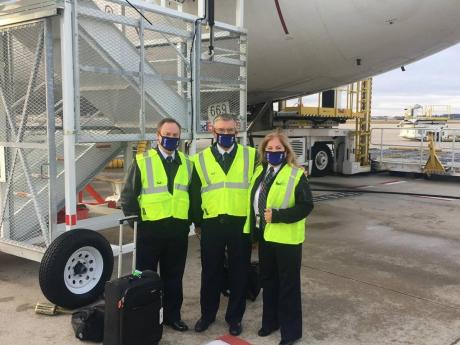 Contributed
From left: FedEx Captains Trey Hollingsworth, Tom Gregory and Muriel Zarlingo (right) share lens time on the tarmac in Grand Rapid, Michigan, where they went to pick up the first shipment of COVID-19 vaccines to be delivered in the United States late last year. 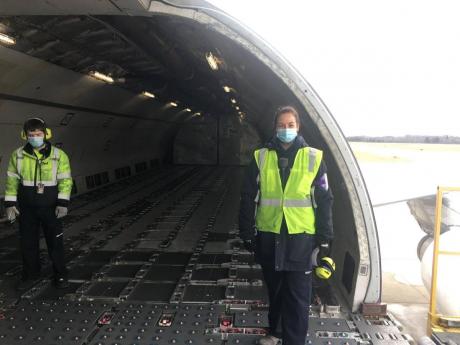 Contributed
Two ground handlers getting ready to pack the first shipment of COVID-19 vaccines on to an A300 600 Airbus in Grand Rapid, Michigan, late last year.
1
2
3

The female captain, who was invited by chief pilot Tom Gregory to join the crew of the high visibility ‘flight of hope’ in December 2020, said it was a “very special moment, giving hope to economies, businesses and communities”.

That first shipment catapulted the countrywide distribution of one million Pfizer vaccine doses in the United States, which Zarlingo, Gregory and Trey Hollingsworth piloted via an A300-600 Airbus at -100 degrees temperatures from Memphis, Tennessee, to Grand Rapid, Michigan.

The flight lasted one hour and 40 minutes, but the mission was life-changing, as the world waited, until former US President Donald Trump, FedEx CEO Fred Smith, a number of heads of state and chief captain Gregory huddled on the phone.

“There were many people who were ready to open the economies, open their communities, and open their businesses and basically have hope for the future,” said the woman, who was born in Puerto Rico to a Mexican father and a Louisianan mom.

“We were delivering hope. Many people waiting to see if the shipment could be done successfully at the temperature of -100 degrees,” Zarlingo told The Gleaner, as she relived overnighting in Grand Rapid on December 12, 2020, and waiting the next day while the special containers on dry ice were loaded.

With pride emanating from her voice, the captain, who worked in the US Air Force before joining FedEx 33 years ago, lauded the loading team on the ramp for doing an excellent job.

The vaccines equated to a shipment of rare gem and were escorted by Federal Air Marshals.

Interestingly, Zarlingo said the chief pilot had recovered from COVID-19, having also being hospitalised as it became life-threatening.

“He was sick for about a month with the virus, so it was very appropriate that he got the first flight taking the vaccine,” she stated, adding that Captain Gregory was very proud to be part of a company and part of a crew to convey optimism throughout the world by delivering the first vaccinations.

“Having had the virus made him feel horrible for a month. He felt honoured,” she said.

As heart-warming and stirring as Gregory and Hollingsworth felt about making the historic trip, Zarlingo was overjoyed. The young Puerto Rican girl who never thought she would be a pilot, although she had wanted to since age 13 because of her passion for aviation, says she was always looking for ways to get jet time.

When she joined the US Air Force, there weren’t many women, much less a Puerto Rican, she quipped.

In fact, in 1985, when she joined the Air Force, she had to compete for a pilot slot and didn’t get one until her second shot. It was the experience of flying high-performance jets in the Air Force that prepared her for the job she later took at FedEx as global pilot, a dream job she loves. Hired at 27 years old, she is now 59 and still looks forward to her trips.

“If you do a good job, just like anybody, they don’t care what your background is or gender, they give you every opportunity to promote,” she said of FedEx.

FedEx also does a lot of humanitarian missions.

Reminiscing, she told The Gleaner that she took a FedEx airbus into Haiti in 2018, when the hurricane devastated that country.

“We [normally] never go in there with an airbus. They don’t have any electronic approaches for us to go in there, but we went in there to deliver food, water, blankets, anything that they need,” said Zarlingo.

The organisation, she says, not only gives equal opportunity but also gives them the opportunity to partake in humanitarian missions, other than delivering everyday cargo.

The Pfizer shot delivery was a big part of that, she stated.