Duke of Edinburgh, husband of Queen Elizabeth II for 73 years, dies at 99 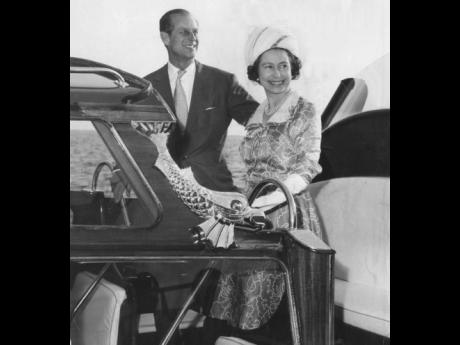 Gleaner Archives
Her Majesty and Prince Philip, having completed the first leg of their five-day state visit to Jamaica, embark on the Royal barge at the Victoria Pier to be taken aboard the ‘Britannia’ anchored in the Kingston Harbour on April 28, 1975. The ‘Britannia’ is the home of the Royal party during their visit. 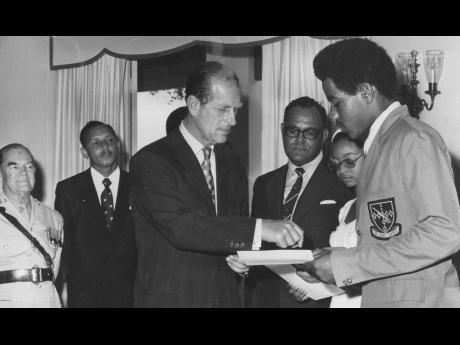 Gleaner Archives
Prince Philip presenting the Gold Award Certificate for participation in the Duke of Edinburgh Award Scheme to Jamaican Errald Jordine on April 30, 1975. Second from right is Claire Shackleford from The Bahamas, who also received her certificate at King’s House. Members of the Duke of Edinburgh Award Scheme Committee including Lt Col Nigel Ince (left), chairman, are also shown. 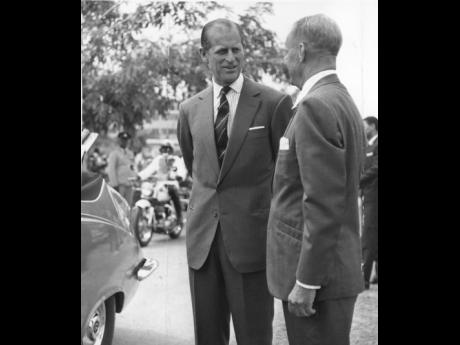 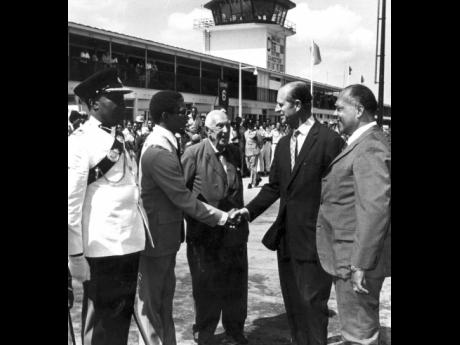 Gleaner Archives
Prince Philip (right) is introduced to the Mayor of Montego Bay Charles Sinclair (second left) by St James Custos Walter Fletcher on the Duke’s arrival at the Sangster International Airport in May 1975 for a tour of the Cornwall Regional Hospital. 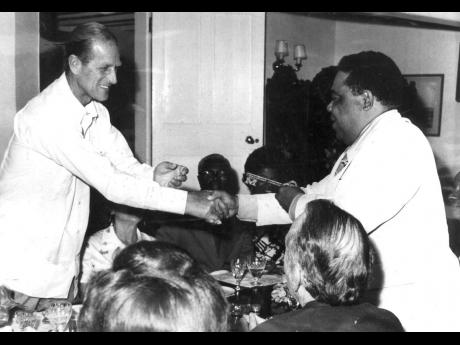 Gleaner Archives
His Royal Highness Prince Philip (left) being presented with the key to Mandeville by Mayor C.C. Charlton in May 1975. 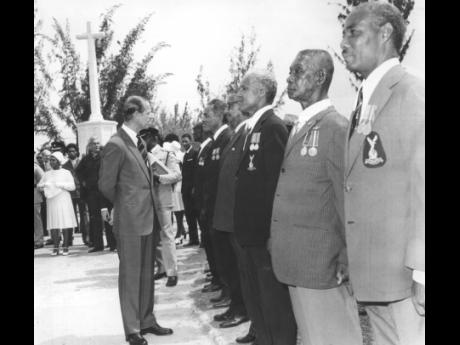 Gleaner Archives
Prince Philip pauses to chat with some of the war veterans who attended the wreath-laying ceremony at the National Heroes Park on April 29, 1975. 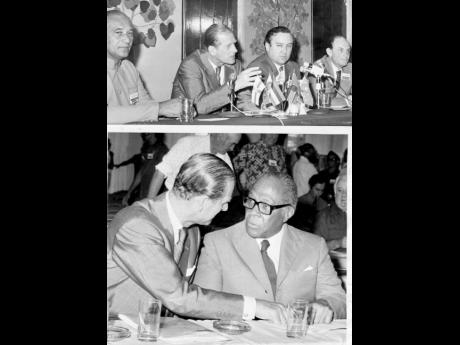 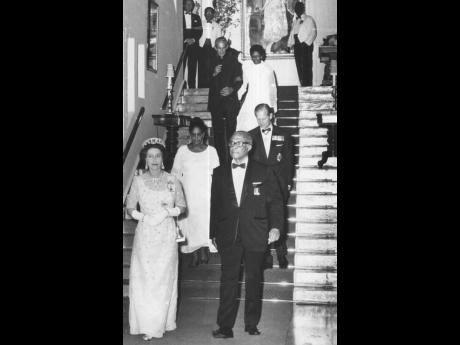 Gleaner Archives
Her Majesty the Queen and Governor General Sir Florizel Glasspole descend the main stairway from the drawing room to the ballroom at King’s House for the state dinner, followed by Lady Glasspole and Prince Philip, then Prime Minister Michael Manley and Beverley Manley. 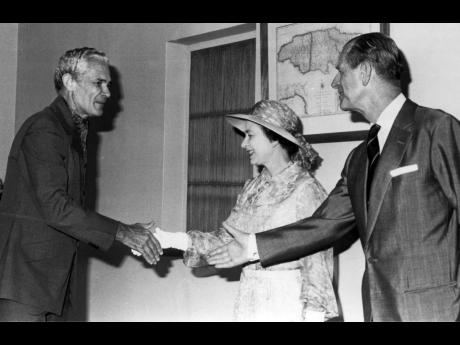 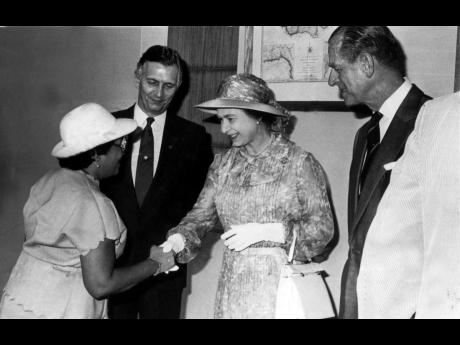 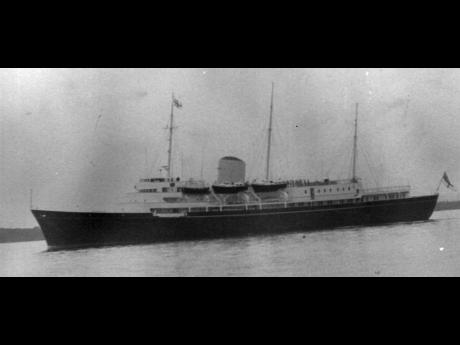 Gleaner Archives
The Royal Yacht ‘Britannia’ in the Kingston Harbour anchored off the Victoria Pier. The ‘Britannia’ was the home of Her Majesty Queen Elizabeth and Prince Philip during their stay in Jamaica in 1975. 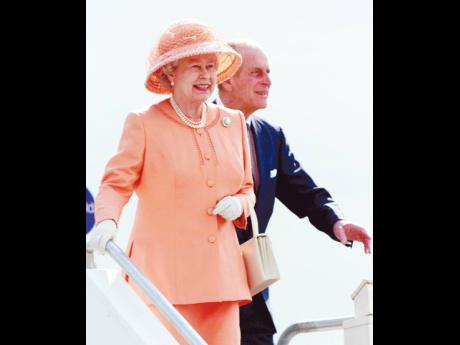 Prince Philip, the irascible and tough-minded husband of Queen Elizabeth II who spent more than seven decades supporting his wife in a role that both defined and constricted his life, died on Friday at age 99, Buckingham Palace announced.

His life spanned nearly a century of European history, starting with his birth into the Greek royal family and ending as Britain’s longest-serving consort during a turbulent reign in which the thousand-year-old monarchy was forced to reinvent itself for the 21st century.

He was known for his occasionally deeply offensive remarks – and for gamely fulfilling more than 20,000 royal engagements to boost British interests at home and abroad. He headed hundreds of charities, founded programmes that helped British schoolchildren participate in outdoor adventures, and played a prominent part in raising his four children.

“It is with deep sorrow that Her Majesty The Queen has announced the death of her beloved husband, His Royal Highness The Prince Philip, Duke of Edinburgh,” the palace said.

Over the course of the decades, Philip’s image changed from that of handsome, dashing athlete to arrogant and insensitive curmudgeon. In his later years, the image finally settled into that of droll and philosophical observer of the times.

Many Britons appreciated what they saw as his propensity to speak his mind, while others criticised behaviour they labelled as racist, sexist or out of touch.

In 1995, for example, he asked a Scottish driving instructor, “How do you keep the natives off the booze long enough to pass the test?” On one visit to a military barracks, he asked a sea cadet instructor if she worked in a strip club.

Still, many believe he was one of the few figures in the Queen’s life who was able to speak plainly to her and provide unvarnished advice.

“All her life she was surrounded by men who said, ‘yes ma’am,’ and he was one man who always told her how it really was, or at least how he saw it,” said royal historian Robert Lacey.

Lacey said at the time of the royal family’s difficult relations with Princess Diana after her marriage to Prince Charles broke down, Philip spoke for the family with authority.

Born June 10, 1921, on the dining room table at his parents’ home on the Greek island of Corfu, Philip was the fifth child and only son of Prince Andrew, younger brother of the king of Greece.

When Philip was 18 months old, his parents were forced into exile and fled to France.

Having given up a promising naval career when Elizabeth became Queen at age 25, Philip was not content to stay on the sidelines. He promoted British industry and science, espoused environmental preservation long before it became fashionable, and travelled widely and frequently in support of his many charities.

In May 2017, Philip announced that he was stepping back from royal duties.

His final years were clouded by controversy and fissures within the royal family.

Philip is survived by the queen and their four children – Prince Charles, Princess Anne, Prince Andrew and Prince Edward – as well as eight grandchildren and 10 great-grandchildren.