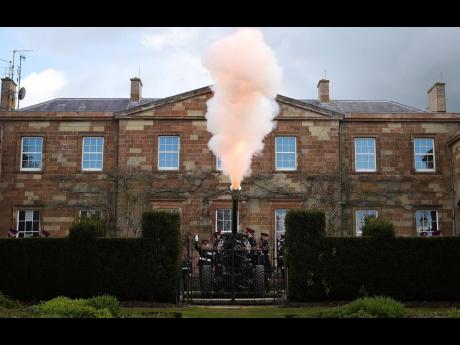 In a statement, the heir to the throne says he is touched by the number of people around the world who have shared the family’s loss and sorrow.

Charles said: “My dear Papa was a very special person who I think, above all else, would have been amazed by the reaction and the touching things that have been said about him. And from that point of view, we are, my family, deeply grateful for all that. It will sustain us in this particular loss and at this particularly sad time.’’

Buckingham Palace says a private family funeral will take place on April 17 at Windsor Castle – a slimmed-down service amid the COVID-19 pandemic that will be entirely closed to the public.

Philip, also known as the Duke of Edinburgh, took part in planning his funeral and its focus on family was in accordance with his wishes. The 99-year-old duke, who died Friday, also took part in designing the modified Land Rover that will carry his coffin.

Buckingham Palace announced the passing of His Royal Highness The Prince Philip, Duke of Edinburgh, and beloved husband of Her Majesty the Queen.

The Royal Family has lost a husband, father, grandfather, and great-grandfather, whose dedication to the Crown, his country and the Commonwealth spans nearly eight decades.

Prince Philip’s legacy will certainly live on in institutions such as the Duke of Edinburgh Awards and other programmes he instituted for the benefit of young people across the Commonwealth.

As the world mourns this significant loss, let us reflect and give thanks for His Royal Highness’ life of devotion to service.

The thoughts and prayers of the Jamaican people are with Her Majesty The Queen and the members of the Royal Family as they mourn this significant loss.

The secretary general of the Commonwealth, Patricia Scotland, QC, paid tribute as follows:

It is with deep sorrow that I have learnt of the death of His Royal Highness The Prince Philip, Duke of Edinburgh.

Through over 70 years of marriage, His Royal Highness supported Her Majesty Queen Elizabeth II in fulfilling her duties as Head of the Commonwealth.

The Duke shared with Her Majesty a high view of what humanity can achieve through cooperation and working together. His questioning mind and sense of adventure, combined with an engaging informality and forthrightness, enabled him to communicate huge positivity and faith as to what could be achieved through individual and international connection.

... [Prince Philip and Queen Elizabeth’s] tours were important expressions of Commonwealth inclusiveness, bringing together countries and communities which – although far apart on the map – were made to feel close because of shared inheritances and their continuing Commonwealth identity, made real in a special way through the physical presence of The Queen and the Duke.

His Royal Highness had a far-sighted understanding of the potential of Commonwealth connection, and his approaches to bringing people together from a wide range of backgrounds to develop leadership skills were regarded as innovative and brave.

With vigour and vision, the Duke of Edinburgh carved out an immensely valuable role for himself within Commonwealth networks, with a focus on projects and programmes through which he could build on his distinctive philosophy of cultivating understanding and self-reliance, and thereby complement Her Majesty’s official responsibilities and duties as Head of the Commonwealth.

... It falls to me, on behalf of the Commonwealth family which he served so long and so faithfully, to offer Her Majesty and all those close to His Royal Highness Prince Philip our heartfelt condolences and sympathy.