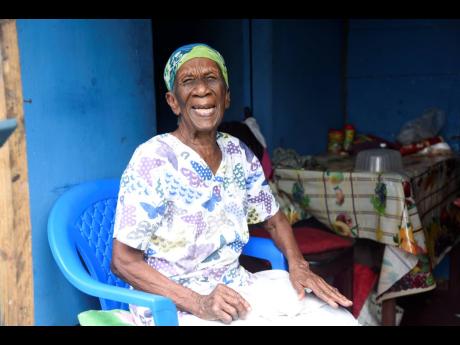 Nicholas Nunes/Photographer
Miriam Sutherland-Davis, who resides in Sunning Hill, St Thomas, on April 10. Sutherland-Davis said she hasn’t left her home since the onset of COVID-19 in March 2020 and wants healthcare workers to swing by her home to administer the COVID-19 vaccine.

Viola Scott and her husband, Stanley, have been married for more than 60 years.

The couple, who live in Sunning Hill, St Thomas, have weathered many storms together, including hurricanes, floods, and recessions.

No stranger to disaster, the 80-year-old woman is confident that both she and her ailing husband will also endure the COVID-19 pandemic.

Mrs Scott is hopeful that mobile vaccination teams will be despatched to conduct home visits so that she could avoid the risk of taking Stanley, seven years her senior, out to receive his jabs.

“I didn’t want both of us to take it at once because if anything happened, I wouldn’t be able to help him. He’s sick and blind, so he’s not really able to help himself,” Scott said of her partner, with whom she has been since she was 17 years old.

That is a source of worry for scores of elderly Jamaicans who are shut-ins or others whose health is sufficiently fragile to be seized with fear of contracting the highly contagious coronavirus, which has killed 672 people here. Most of them have been above 60, with severe complications and death more likely deeper into the age cohort.

Islandwide vaccination blitzes in cities and towns offer a big push for the Government’s four-day target of 50,000, but a precious few might be slipping through the cracks.

President of the Caribbean Community of Retired Persons, Jean Lowrie-Chin, said that while she has been impressed by the inoculation drive, the Ministry of Health and Wellness should operationalise mobile units to seek out hard-to-reach elderly.

“We get calls from seniors whenever they don’t think they are well served, and we have not gotten any complaints about shut-ins not being able to get vaccines,” said Lowrie-Chin.

An estimated 313,000 people are older than 50, said Lowrie-Chin, citing data from the Statistical Institute of Jamaica.

The Scotts, who share 10 children - five of whom are alive – 24 grandchildren, and more than 20 great-grandchildren, are determined to overcome the pandemic.

“We have survived a lot of things together, including no money, hard life, good life, but we still go through and reach to the stage weh we stuck now,” Mrs Scott said, laughing.

That’s why she has already stepped up to the plate to take the Oxford-AstraZeneca jab.

“I took it Wednesday and I’m around same way, no fever, no headache, nothing. I have underlying illnesses – pressure, sugar, high cholesterol ... so I know if I catch COVID, mi nah guh recover, so that’s why I took it,” she told The Gleaner on Saturday.

Mrs Scott remembers getting vaccinated when she was a student, a tradition she continued with her own children. Inoculation has been a shield against diseases like measles, and the fight against the novel coronavirus requires high levels of vaccine take-up to achieve herd immunity.

But Jamaica’s target of inoculating 65 per cent by March 2022 could be in jeopardy if high levels of suspicion persist.

“If there is an illness and there is a vaccine, mi nah follow people. I don’t take anybody’s belief. What I decide to do, I do, and not with encouragement from anybody else,” she laughed as she rubbished conspiracy theories talk of the vaccine being the ‘Mark of the Beast’.

Mrs Scott shared that plans are also being made to have her husband, who is seven years her senior, inoculated.

“I didn’t want both of us to take it at once because if anything happened, I wouldn’t be able to help him. He’s sick and blind, so he’s not really able to help himself,” Scott said of her partner, with whom she’s been since she was 17 years old.

A few yards away from the Scotts also lives an elderly woman who is hoping medical practitioners will take the vaccine to her.

Miriam Sutherland-Davis, who is in her 70s, resides with her elderly cousin. Sutherland-Davis told The Gleaner that she has not left her home since the onset of the virus.

“COVID is a dangerous thing. It a tek life and some take it for joke. Mi will take the vaccine, but mi eye dem sick and mi can’t go far so. If they carry it come, I will take it,” she said.

When told that her cousin, with whom our news team had met earlier, said she was not interested in taking the vaccine, Sutherland-Davis shook her head in annoyance.

“She nuh listen weh mi say. Many people say they don’t want the vaccine, but nothing nuh do it. People are taking it, and dem who saying dem not taking it must know how it a guh guh with them. What more mi fi say?” Sutherland-Davis asked.