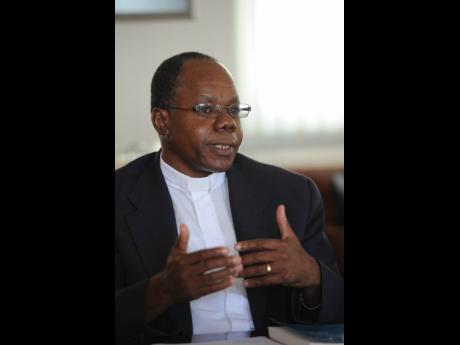 File
Canon Garth Minott was snubbed as the new Suffragan Bishop of Kingston.

The Reverend Canon Garth Minott, the single nominee put to the vote as the new Suffragan Bishop of Kingston, has failed to secure the required support of the Anglican Church in Jamaica.

Archbishop of the West Indies and Bishop of Jamaica and The Cayman Islands, the Most Rev Dr Howard Gregory, who had nominated Canon Minott, said that he had expected that his nomination would have carried sway. Gregory has hinted that Minott’s youth, among other factors, might have been among the deciding factors.

It is unlikely that the post will be filled this year.

There were two rounds of voting to select the Bishop of Kingston, which is the most powerful region within the local Anglican Church, comprising 230 churches islandwide.

While Minott had secured the required votes from one group, he failed to harness support from the other group.

Gregory declined to divulge how the two categories voted, but more than 200 persons cast ballots overall.

“Because it’s two-thirds, you still get a significant amount of support, but all it takes is a smaller group to have a diversity of interest,” he said.

The Suffragan Bishop functions in an assistant capacity to the Diocesan Bishop.

“You would expect that who you nominate would be elected because it means that, let’s put it this way, in your position, if the boss says to you, choose somebody to work with you, you want to make sure that you look at the qualities that would best fit what you need to be done and who you think you can work with, so that’s what I exercised,” Gregory said.

The archbishop noted that there could be several reasons why his nominee was not selected.

“Like any organisation, there can be persons who can be interested; there are persons who think somebody else should, so there are different things at work. The age comes into play because, of course, he was younger than some of the other senior clergy, so there are things that come into play,” he said.

Minott was ordained a deacon in 1992 and a priest the following year.