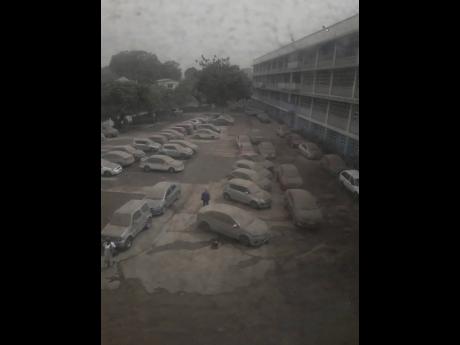 Barbados Today
The car park at the Queen Elizabeth Hospital in Bridgetown, Barbados, is covered in ash and dust blown from the Soufriere Volcano. 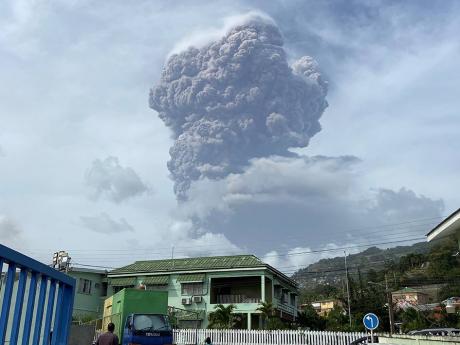 Kenton X. Chance/iWitness News
A plume of ash rises in the air and is seen from Kingstown, the capital of St Vincent and the Grenadines, on Friday.
1
2

Weighed down under ash, thirsty for water and oxygen, accessible only by sea, predictions are it will take Vincentians three to four months to recover from the devastating volcanic eruption that has displaced 20,000 people in that Caribbean country.

Days after residents were evacuated from the red zone, nowhere on the island is unscathed by the puffing rage of the volcano, Maureen Webber, a Jamaican living there, has told The Gleaner.

La Soufrière volcano erupted last Friday, transforming the island into the Sahara-like canvas of gloom, with rocks landing on homes, small, intermittent fires being sparked, and homes blanketed in dust and ash.

Webber, who was able to raise US$20,000 (J$3 million) in hours to purchase things such as food, diapers for the disabled, and water for an emergency centre she is sponsoring, spoke of how dangerous it was to go outside her home, owing to the impact that the ash can have on the lungs.

“It is raining, and the ash on the ground is turning into concrete, and that is exactly what it does to the lungs,” said the human development expert, who has resided in St Vincent and the Grenadines for the past two years managing a World Bank-funded project.

The eruption appears to be worse than 1979, residents have told her, when many thousands were displaced.

“The dust is much more intense this time, but I feel the people here have a resilience within,” Webber said, noting that the northern region of the island, namely Sandy Bay, which is across from the Dry River area, had been hardest hit. It is estimated that persons will not be able to return there for months to come.

Webber is in touch with 45 of her countrymen who are part of a St Vincent-Jamaican WhatsApp group. According to her, two Jamaicans were originally in what was tagged the red zone, but have since been evacuated.

“They are now fine,” she added.

Mikhail Francis, a Jamaican who has lived in St Vincent since 1987, says he has been suffering from power outages since Saturday, owing to the volcanic particles that are a positive charge for electricity, resulting in fires on the utility poles.

He has been forced to seal the windows in his home to prevent the sulphurous odour from invading his home.

“We would love to have some ventilation, but we know that is not possible at this time,” he told The Gleaner on Sunday evening.

NEMO has issued its ninth warning for the day, stating that the explosive eruptions will continue for the next few days.

Webber’s account was corroborated by Camillo Gonsalves, son of Prime Minister Ralph Gonsalves, who said conditions in the shelters were very uneven.

“Some are adequate, others less so. We were probably two weeks too slow in acquiring additional cots, so a few thousand cots are still in Miami awaiting clearance to fly down,” he said, citing the closure of the airspace as a factor.

“As such, many people are sleeping on the floor. That situation is slowly being resolved with donations and makeshift solutions.”

The younger Gonsalves, who is the minister of finance, economic planning, and information technology, believes that about 20,000 people will be internally displaced for up to three or four months. Historically, the volcano keeps going intermittently for a couple months.

So far, Infrastructural damage is not as bad as feared, he said, as not a great deal of lava has flowed in the direction of villages, which have been covered in ash and rocks.

“However most crops on island will be lost, and untold livestock,” he said.

The greatest immediate challenge, he said, was the safety of evacuees.

COVID-19, he said, remained an underlying threat because of the conditions in which people are housed.