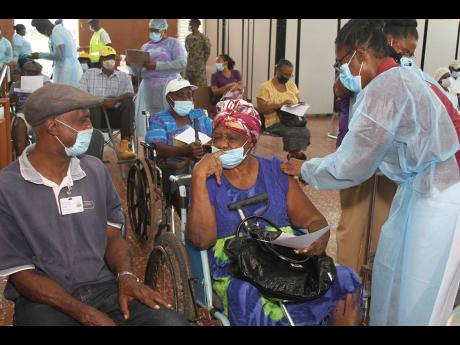 Nathaniel Stewart/Photographer
Eileen Ramsay, 83, winces as she receives her first dose of the Oxford-AstraZeneca vaccine while her son-in-law, Rohan Gentles, looks on at Manchester High School on Sunday. 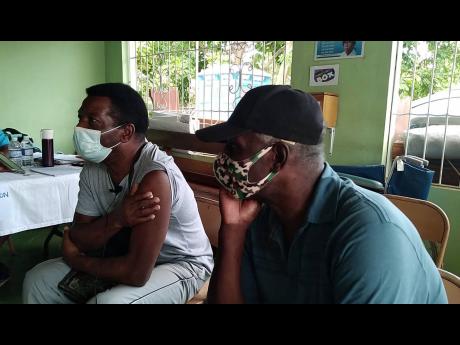 Nathaniel Stewart/Photographer
Visually impaired brothers Victor Ottey (left), 59, and Derek Ottey, 68, are fearful that countries will make it mandatory for travellers to be vaccinated for entry to their ports. The brothers got their COVID-19 shots at Downs Health Centre on Sunday.
1
2

Below-par take-up by critical groups on the priority list for COVID-19 vaccination has triggered the expansion of the inoculation of younger people that caused immunisation sites to swell with crowds and long lines on Sunday. That revelation...

Below-par take-up by critical groups on the priority list for COVID-19 vaccination has triggered the expansion of the inoculation of younger people that caused immunisation sites to swell with crowds and long lines on Sunday.

That revelation foreshadows the possibility of Jamaica missing its March 2022 target of 65 per cent immunisation of the population to achieve herd immunity.

Preliminary data issued by the Ministry of Health and Wellness indicate that 18,345 people got their first dose of the Oxford-AstraZeneca on Sunday, an increase of 5,857 when compared to the turnout for vaccination on Saturday.

The western and northeastern regions represented 18 per cent and 14 per cent, respectively.

Questions arose about the eleventh-hour inclusion of persons 50 and over, as well as 40 year-olds with underlying illnesses that make them more vulnerable to severe bouts of COVID-19. Transport workers and journalists also made the list.

Dr Melody Ennis, director of family health services in the ministry, said that new groups were targeted after analysis showed that initial projections were on course to be missed.

“ ... When we did our evaluation, the persons in those groups aren’t coming out, and there are persons who have comorbid conditions in particular that we know are more vulnerable. It was prudent to invite those persons to come in ... ,” Ennis told The Gleaner on Sunday.

But she was quick to play down anxiety that the Government adjusted the benchmark because some of its inventory of the Oxford-AstraZeneca vaccine was in danger of spoilage.

She declined to disclose the expiry dates of the three batches of vaccine, totalling 114,000 doses, since the first shipment arrived in Kingston on March 8.

The most recent delivery of vaccines occurred on April 9.

The Oxford-AstraZeneca vaccine has a shelflife of six months after manufacturing, said Ennis.

Chairman of the Southern Regional Health Authority (SRHA), Wayne Chen, said areas such as Mandeville exceeded the initial target of 1,000 per day but still fell short when a holistic analysis of the residential population was assessed.

“ ... In the southern region, the parish of Manchester has 190,000 persons, so if you were to carve out the percentages of people over 50, 60, and 75 years, you are talking in the high tens of thousands. So the potential audience is there; it’s just now to find ways to get people out,” Chen said.

He said that the weekend lockdown may have caused some persons to be doubtful that they would be able to access transportation to vaccination sites.

While many remain undecided, Eileen Ramsay, an 83-year-old who showed up with her son-in-law to be vaccinated at Manchester High School, said that although her younger relatives were resistant to getting the shot, she recognised that it could be a lifesaver.

“Not afraid of COVID, but what is to happen have to happen ... . I tell my niece to come, and she told me that is old people something. I tell her whether she old or she young, she can get it (COVID),” said Ramsay.

The Downs Community Centre in south Manchester, which fell short of its target of 200 persons on day one, exceed that target by day two.

Eighty-eight people turned out on Saturday, but 158 were registered by midday Sunday.

“I am satisfied with the turnout. ... They have been very understanding and patient because they have to wait for some time for the vaccine because of the process,” said centre manager Carlette Thompson.

Two blind brothers with comorbidities said that they were eager to get vaccinated because they feared that countries might impose travel restrictions against persons who do not get the jab.

“ ... I have children in England, and if I haven’t got the vaccine, God knows when I will be able to travel,” said Derek Ottey, 68, who has diabetes.

Both returning residents, Derek and his brother, Victor, have reservations about the future.

The vaccination blitz is expected to continue at select locations until Tuesday, with the previously implemented tier system to resume on Wednesday.