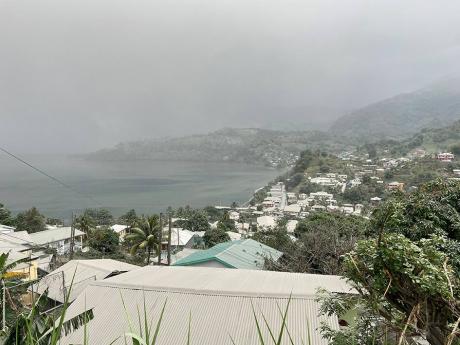 Kenton X. Chance/iWitness News
The northwestern town of Chateaubelair, located about two miles from La Soufrière, is blanketed in ash on Friday, hours after the volcano erupted.

When 44-year-old farmer Kojo Stephen heard the rumblings from La Soufrière, he thought that he would not have to leave his beloved village of Chateaubelair.

Little did he know that the rumblings from the mountain were only a harbinger of things to come.

As the volcano spewed ash and bellowed, Stephen found it extremely difficult to leave his village.

“One of the problems I had is that I have many heads of animals. I am a father and a grandfather, so I have some very expensive animals for my children and my grandchildren, so it was hard for me to leave,” he said.

This decision was supported by several elders in his village who previously experienced the 1979 eruption.

However, Stephen decided not to risk the safety of his family.

“I was there, and I told my wife, the way how I smell the sulphur and feel this thing, it seems like we have to leave. So I would like you guys to put your stuff together and go. I will be here to take control the house ... because this seems like it is going to be something even bigger,” he said.

After sending his wife away to the capital Kingstown, Stephen resumed work on his farm with his son. Even though more than 90 per cent of his village left, several community members stayed behind in order to protect the property.

This decision weighed heavily on his mind as the growls from the volcano grew louder and the ash blanketed the landscape in a grey shroud.

“I did not sleep the night prior to the explosion. On the morning I woke up, I tended my goats and watered my plants because the place was so hot,” he said.

Yet, Stephen began to make preparations just in case the worst came to pass. At this point, he was visited by his friend, who was surprised that he was still on his farm and commended his bravery. “I said no, I was not being brave. In case anything, my wife said just bring the foodstuff, so the bag was already packed,” he explained. “All I am waiting for is to hear the call from the authorities.” Then suddenly, a pillar of smoke and ash shot through the air. The eruption had begun.

As his son panicked, Stephen decided that it was time to end his resistance to evacuation.

After leaving the red zone, he tried unsuccessfully to get in contact with a fellow member of his agricultural cooperative. That appeal was hobbled by communication problems. But he was fortunate enough to rely on a cousin of his who transferred him and others willing to leave Chateaubelair.

Stephen’s greatest concern is looting, as friends in neighbouring villages like Rose Hall have reported seeing men wandering in the abandoned districts. He is also concerned about his inability to give his animals food and water.

These fears are not unique, as Dr Jerrol Thompson, chief executive officer of St Vincent and the Grenadines Medicinal Cannabis Authority, explained. He has visited several shelters throughout the island.

“People are very worried about some of their relatives who decided to stay behind, like a husband, a son, or a nephew. They also worry about their animals and aspects of security,” Thompson said.

“The two northern constituencies are heavy farming communities, so they are worried about their crops although they are very grateful that their lives are spared. There are going to be instances where people will have a smile on their face, but there is growing tension.”