Youths go shoulder to shoulder with elderly for COVID shot 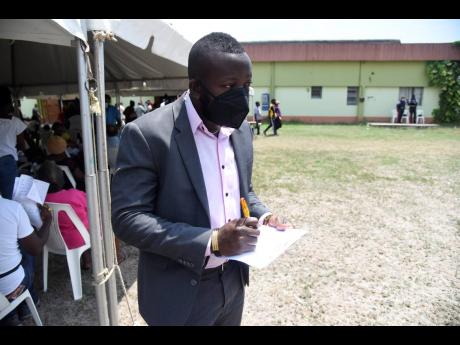 Nicholas Nunes/Photographer
Jason Brown, 27, a sales executive, turned out to get vaccinated at Twickenham Park Open Bible Church on the fringes of Spanish Town on Monday. 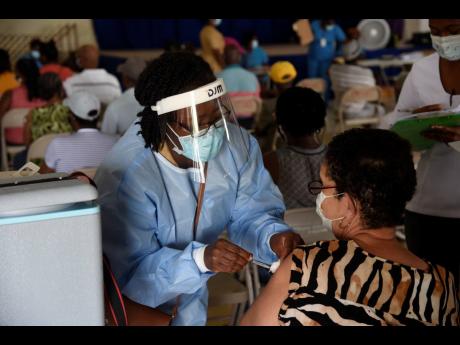 Concerned that the latest batch of COVID-19 vaccines shipped to Jamaica expires today, 20-year-old Hallie Fletcher was not daunted by the large turnout that greeted her at the Twickenham Park Open Bible Church in St Catherine on Monday.

The University of the West Indies (UWI) student, who works part-time in the transportation sector, said she was patiently waiting for her age cohort to get the green light.

But she seized the opportunity when the Government opened up vaccine sites to wide-ranging target groups in a bid to boost take-up of the vaccines, which expire at midnight Tuesday.

The 75,000 doses of Oxford-AstraZeneca, a gift from the South African government under the Africa Medical Supplies Platform, arrived on April 8.

“There are a lot of young people who really want to get the vaccine and I feel that if the Government was kinda more transparent with us, and say okay, these vaccines are going to be expired, then a lot of persons, young persons like me would come out and get them,” Fletcher said.

A four-day islandwide vaccination blitz that started on Saturday appears headed to crest its target of 50,000 inoculations, with approximately 31,000 doses administered by the end of day two.

As news spread that previous restrictions were relaxed, Fletcher and her sister-in-law, 25-year-old Shadae Heron, first went to the St Jago Park Health Centre, but were told the vaccination blitz wouldn’t begin until in the evening. They were then informed by a Jamaica Defence Force soldier at Twickenham Park that they would have to play second fiddle to senior citizens and other priority groups.

Medical officer of health for St Catherine, Dr Francia Prosper-Chen, said that her team was up for the challenge of the mass vaccination thrust.

“I always set a target of 1,000, but I’m hoping today will be as successful as yesterday (Sunday), and I am going to say, with fingers crossed behind my back, 2000,” she said of her prospective goal for Monday.

Long after the 9 a.m. start time, the medical officer was still making arrangements for more tents and chairs to be placed outside the church as more and more persons turned up to be inoculated.

Director of family services in the Ministry of Health & Wellness, Dr Melody Ennis, is hoping that the 75,000 doses of vaccines will be utilised before the expiration date.

“It is a valuable, precious commodity, so we can’t let it go to waste,” she told The Gleaner on Monday.

She said MOH officials were aware of the expiration date in accepting the gift, but considered the need for the vaccines trumped concerns about the narrow window.

“We could say, why take them? And that is a reasonable question, but we can say, why not? If we did not, today 31,000 additional Jamaicans would not have been vaccinated,” she said.

Opposition Spokesman on Health and Wellness Dr Morais Guy said he rejected any attempt by the Government to use the AstraZeneca vaccines after the expiry date.

Chief Medical Officer Dr Jacquiline Bisasor-McKenzie said that the ministry would seek authorisation from the WHO and the manufacturers for use after the six-month shelf life. But Guy said the expired vaccines could expose the Jamaican population to health risks.

“Had the Government been forthcoming about the expiration date of the recently acquired shipment of vaccine, and alerted the public of the reduced usage window, I am sure people would have cooperated with requests for immediate take-up. Instead, citizens were left to make the discovery on their own, reducing public confidence,” he said in a statement on Monday.

Ennis said the vaccination campaign would revert to the earlier priority groups on Wednesday.

More than 75,000 Jamaicans had received the first dose of vaccine up to Sunday evening.