HURT BY HIS MARK 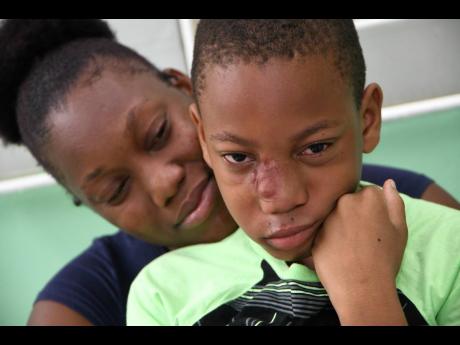 Rudolph Brown/Photographer
Susan Gordon comforts her son, Jabari Osborne, who has a rare condition, arteriovenous malformation, a growth on his face that was complicated after a bullying incident.

The cute heart-shape birthmark Jabari Osborne was born with has since mushroomed into a lump on his face that has attracted snide remarks from adults, and unpleasant stares and verbal and physical attacks from bullies. The 10-year-old no longer...

The cute heart-shape birthmark Jabari Osborne was born with has since mushroomed into a lump on his face that has attracted snide remarks from adults, and unpleasant stares and verbal and physical attacks from bullies.

The 10-year-old no longer wants to venture far from home and has become angry and unhappy as he deals with the reality that just falling off a bicycle and rupturing the lump could be fatal.

In 2018, he spent two months and two weeks at the Bustamante Hospital for Children for treatment after the area ruptured. And while the medical team was able to stop the bleeding, they could not permanently fix the problem.

His mother, Susan Gordon, was informed then of the seriousness of her son’s condition, which doctors had initially diagnosed as being haemangioma.

In January 2019, things took a turn for the worse when Jabari was punched in the face by a little girl at school who constantly bullies him.

“She saw him and she was troubling him about it and she actually bullied him about it. The teacher spoke to her, so she knew how delicate a situation it was, and she still punched him in the face,” recounted Gordon.

“It has built his anger because they will just come up and call him a name or tell him he is ugly or yuck, what is that on your face?” said the mother of her only child.

Such attacks have stoked smouldering rage in the young boy.

Both mother and child were in tears as they spoke about how the constant bullying has affected them. Gordon has been accused of abusing her child, while even adults taunt her son for being “bad” after assuming that the mark is self-inflicted.

“It hurts me and it hurts him, and he tries so hard to be strong for me that he hides how he really feels, but I see it,” she told The Gleaner.

Jabari did not disguise his feelings about the constant insults.

“I feel angry and I feel sad,” he said as his small arms brushed away tears.

“Don’t bully other kids, because you don’t know what they are going through,” he cried.

A study commissioned by the Child Development Agency and funded by UNICEF Jamaica in 2015 found that just over 60-65 per cent of students have been bullied at some point in their lives. According to the study, many bullies develop mental-health challenges, including attention deficit disorder, depression, and oppositional-conduct disorder.

“It hurts and people don’t understand that. I tell my son all the time, do not discriminate against people because of how they look, you don’t know what they are going through,” Gordon said.

The mother had mulled over pulling Jabari from school to safeguard him from further injuries, but with classes now online, that is no longer a consideration.

Gordon, who does data entry for a living, sought out three experts to assist her son, but after spending money for consultations, she was told there was nothing they could do. They instructed her to watch and wait.

Waiting has proven to be painful, as the mother watches how depressed her son has got with each passing day. After conducting research, she came across the Vascular Birthmark Institute (VBI) at the Lenox Hospital in New York and was introduced to the director, Dr Milton Waner.

Jabari has since been diagnosed as having an arteriovenous malformation, also known as AVM. Like the local doctors, Waner, too, warned that it could be fatal.

AVM results in the abnormal tangling of blood vessels connecting arteries and veins, which disrupts normal blood flow and oxygen circulation. The rupturing or weakening of the veins can cause bleeding in the brain or can cause Jabari to bleed to death.

“It’s still hard just thinking about it, because for someone to tell you that you are going to lose your only child, it is not something easy,” she said.

In order to prevent further damage, Jabari will need US$32,500 for AVM surgery and travel fare to New York.

Jabari’s aunt, Karen Osborne, has since set up a GoFundMe account that has raised US$600 so far, and so the family is now trying to close the financial gap.

Waner insists that the surgery will need to be done by July 2021.

Gordon, who was diagnosed with a brain tumour in August 2019, has prioritised her son’s health and is appealing to those who can make a contribution to do so.

The mother, who is in constant pain and who has had two seizures and regular fainting spells, is scheduled to undergo surgery at the Kingston Public Hospital in August.

The mother longs to see her son happy again, but he is also concerned about her health.