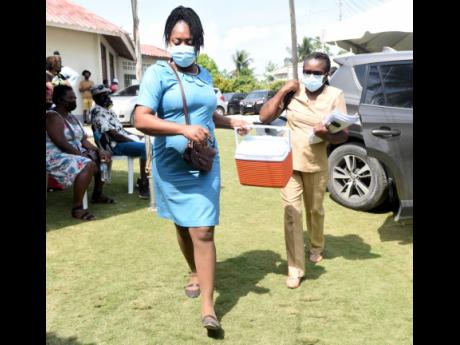 Ian Allen/Photographer
A healthcare worker rushes with an igloo with 200 vaccines after public health nurse Novelette Stennett arrives at the Holy Trinity Anglican Church in Linstead, St Catherine, on Tuesday. The centre ran out of vaccines early in the morning, with some persons waiting more than seven hours for new supplies. 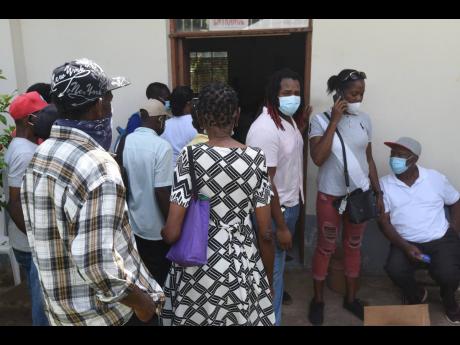 Ian Allen/Photographer
Frustrated persons gather at the door to the vaccination centre at the Holy Trinity Anglican Church in Linstead, St Catherine, on Tuesday when they heard that they would not be immunised until next week Tuesday. When new vials arrived, persons were told that only 200 doses were available.
1
2

The return of public health nurse Novelette Stennett to the Linstead Anglican Church at 2:23 on Tuesday afternoon with the much-anticipated vials of Oxford-AstraZeneca vaccine triggered excitement among the persons who had been waiting, some from as early as 7 o’clock.

Their optimism, however, quickly turned to disappointment when she announced that only 200 doses of the COVID-19 vaccine were on hand and that the elderly would be given priority.

Confusion reigned among those who had sat patiently for more than seven hours under tents, leaving their seats only for lunch and bathroom breaks.

Then Stennett offered a glimmer of hope when she announced that the Knollis Health Centre in the parish was also offering vaccinations but had only 100 doses.

A number of persons were seen attempting a headcount and obviously calculating their chances of making it into the chosen 200. Others moved quickly, taking the gamble to quickly grab a cab and head to Knollis.

The discipline of the persons on show was remarkable, as food and drink vendors took advantage of their entrapment to peddle their wares, with water and soft drinks being gobbled up quickly as the afternoon sun beat down relentlessly.

About 20 doses of vaccine had been administered in the morning, and when they ran out, Stennett, a zone coordinator, had given her word that she would return with more.

The delay caused some people to eventually give up and leave, for those who persevered, it was well worth the wait.

Women outnumbered men, with one lady who had travelled from the neighbouring community of Ewarton telling The Gleaner that she was prepared to stay until at least 4 p.m. once she was assured of being vaccinated. She explained that her health was worth the wait.

Meanwhile, on a day when there were reports of vaccine shortages at other blitz sites across the country, crowds at the Old Harbour Civic Centre held out hope at 12:20 in the afternoon that vials would be distributed. Persons reported being there for hours.

Medical officer of health for St Catherine, Dr Francia Prosper-Chen, said that vaccinations should have commenced at 9 o’clock but logistical problems delayed transportation of relief supplies.