Exhausted nurses back on the job after blitz 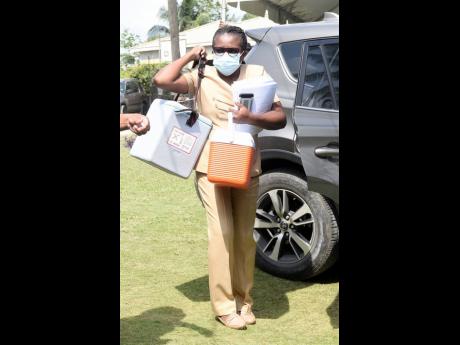 Ian Allen/Photographer
Public health nurse Novlette Stennett arriving at the Holy Trinity Anglican Church in Linstead, St Catherine, with an igloo with roughly 200 COVID-19 doses on Tuesday. The centre ran out of vaccines early in the morning, with some persons waiting more than seven hours for new supplies. 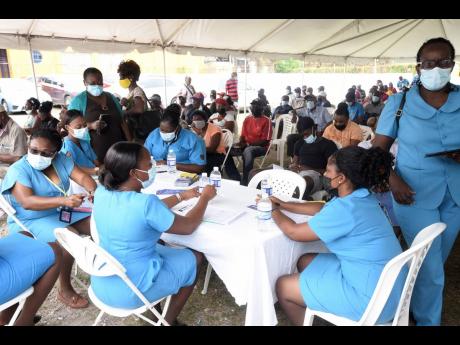 Ian Allen/Photographer
Health workers and hundreds of anxious people awaiting the arrival of the COVID-19 jabs at the Old Harbour Civic Centre in St Catherine on Tuesday. The vaccines arrived in the afternoon, hours after the scheduled 9 a.m. start.
1
2

Although happy that more than 75,000 Jamaicans took their first COVID-19 jab in the recent five-day vaccination blitz, Nurses Association of Jamaica (NAJ) President Patsy Edwards Henry said that the nurses across the island are now exhausted and...

Although happy that more than 75,000 Jamaicans took their first COVID-19 jab in the recent five-day vaccination blitz, Nurses Association of Jamaica (NAJ) President Patsy Edwards Henry said that the nurses across the island are now exhausted and hoping that there will not be a repeat.

The mass vaccination effort started on a small scale at the National Arena last Friday and blossomed into an islandwide effort over the weekend until Tuesday to utilise the 75,000 doses of AstraZeneca vaccine that were a gift from the Africa Medical Supplies Platform as they were due to be expired on the Tuesday. Thousands of Jamaicans responded to the call to be vaccinated, resulting in the health team spending hours on their feet and, in some cases, unable to take breaks to have a meal.

“The entire team, they did an excellent job; 75,000 vaccines in five days is no easy feat,” said the NAJ president.

Despite the burnout, the nurses were back to their regular routines at health facilities on Wednesday morning. Public health nurses had to do their surveillances reports for submission, while others took up their usual posts, caring for patients.

Edwards Henry said that other appointments piled up at health facilities during the blitz, and chuckled at the idea of a break. She said her idea of a break would be for the nurses to be given a day pass or an overnight stay at a hotel.

“Sometimes the lunch came and it was really at the end of the day that you really got to have it,” she told The Gleaner.

She said she was surprised at the huge turnout for the vaccination blitz, which resulted in a few 12-hour workdays.

“We are tired; however, we are really happy that we were able to accomplish the tasks set out, so that we can say that none of our doses were wasted,” she said.

Zone coordinator for Linstead, Novlette Gordon Stennett, was a welcome sight for the large crowd that gathered at the Holy Trinity Anglican Church in Linstead on Tuesday as persons eagerly waited to be inoculated. The public health nurse, who was tasked with taking the vaccines to the site, said she had never had a day like Tuesday. She has been a public health nurse since 2002.

Both nurses were pained to see so many persons who turned up not getting the jab as supplies ran out, but they were comforted by the fact that there will be other opportunities.

Sixty-six-year-old Banbury resident Dezmena McLeggan had visited the Anglican Church from 7:30 Tuesday morning, hoping to be vaccinated, but she was told that this was not possible since she did not have an appointment and supplies were limited. She said that the team assured her that she would be contacted to come in for a jab at another time.

The senior citizen said that although her husband had taken the vaccine, she was hesitant. When she realised that several persons in the community were getting vaccinated, she decided to get her “jook”, albeit driven by a bit of misinformation.

Phased vaccination will resume on Monday for persons 60 years and over.