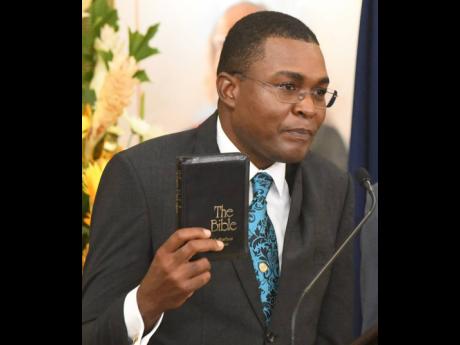 Within months, legislation which allows judges to place children in penal institutions without being charged could be repealed if the tough-talking junior education and youth minister, Robert Morgan, has his way.

Morgan, who has responsibility for the youth portfolio, is also pushing to put an end to children three years old and younger living in children’s homes.

Work has started in reforming the Child Care and Protection Act of 2007, with plans to repeal Section 24, which gives judges the discretion to use a detention order to place children in penal institutions without charge.

Morgan lamented the number of children in penal institutions because their parents believe they are uncontrollable.

“That is not something we are willing to tolerate. That Cabinet submission has already been completed and going through the process, and we expect, within a few weeks to months, no child in Jamaica will be given a detention order without charge and placed in a penal institution,” he told stakeholders in attendance at Tuesday’s virtual launch of May as Child Month.

Morgan and his team at the Child Protection and Family Services Agency (CPFSA) have been assessing the policy framework governing the care of very young children.

State homes, he said, are “no place for a child under three”.

He, however, did not disclose alternative models.

The junior minister’s announcements come in the wake of outrage over recent reports of sexual and physical abuse to children, including a 2020 buggery of a four-year-old at a day care and the rape of an eight-year-old girl over an 18-month period beginning in January 2019.

Wednesday’s revelation of the alleged physical abuse of four wards of the state at the Westmoreland-based Clifton Boys’ Home has also sparked renewed scrutiny.

Morgan is calling for Jamaicans to coalesce around the National Plan of Action for an ‘Integrated Response to Children and Violence’, which is part of the country’s strategy to end violence against children over a five-year period.

“Conversation needs to take place in our society that no one individual, no one entity, no matter how strong, not the CISOCA, not the police, will be able to protect our children unless everyone decides that protecting one’s children is important,” the state minister told The Gleaner.

Admitting that the country was at a cultural crossroads, Morgan also referenced alarming reports coming out of the Office of the Director of Public Prosecutions in relation to the incidence of abuse in state and private facilities.

He called for a bigger conversation on the crisis.

Morgan said that families should stop viewing children in transactional terms but to recognise their humanity.

Morgan said the ministry was seeking to reform the country’s childcare system, strengthening the licensing regime of children’s homes, while charting a path for the maintenance of international best practices.

“There are plans in place to build a Centre of Excellence at Maxfield Park Children’s Home, where not only will we have good psychosocial intervention, in terms of children, but a place where childcare professionals can come and learn the best practices in the system,” he said.