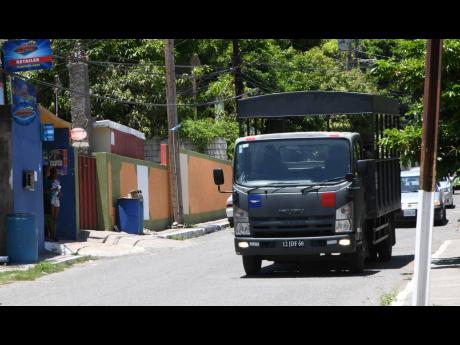 Contributed
The military patrols a street in Tavern, St Andrew, on Thursday, a day after reputed gangster Christopher ‘Dog Paw’ Linton was freed by the appeal court.

Senior attorney-at-law Diane Jobson has dismissed as ridiculous assertions that “a monster has been let loose on society” in the wake of the acquittal of reputed gang leader Christopher ‘Dog Paw’ Linton. The 28-year-old reputed gangster and his co...

Senior attorney-at-law Diane Jobson has dismissed as ridiculous assertions that “a monster has been let loose on society” in the wake of the acquittal of reputed gang leader Christopher ‘Dog Paw’ Linton.

The 28-year-old reputed gangster and his co-accused, Micah Allen, who were both serving 15-year sentences, were on Wednesday freed of charges of shooting with intent and illegal possession of firearm in the Court of Appeal and have both been released from prison.

Both men had been accused of shooting at two policemen travelling in a service vehicle along Tavern Drive, St Andrew, in April 2010.

They had, however, denied the allegations at their trial but were found guilty and convicted to 15 years each on the charges. The sentences were to run concurrently.

Jobson, who had represented Linton during the trial, said that the system has failed but has righted a wrong.

“That is ridiculous because for the past six years that he has been in custody, it will show that violence in the August Town community has increased tenfold, the same with the gang activities and all that,” Jobson told The Gleaner on Thursday.

“All I can say is that when he was there, things were better off, and is not a matter of a gang leader being let loose on society. It’s a person who is the wrongly accused being vindicated,” she said.

Jobson added that Linton, before his incarceration, had helped to set up a basic school in August Town, hosted Christmas treats for children, and had also organised a sand-mining venture in the community.

“Everybody hears the bad version of who Christopher Linton is and never the good version, how he is a community person, how he writes poetry and songs. The side that you hear about him in the newspaper about him being a gang leader is not necessarily the measure of him,” she added.

Jobson said she had always felt that Linton would have been freed and praised lawyers Robert Fletcher and Patrick Peterkin, who represented Linton and Allen, respectively, for doing “a good job”.

She explained that the main issue in the trial had been the issue of the identification evidence.

“According to the police, he was travelling at 15 miles per hour and 25 feet away he saw four people at a corner where there was no street light. The streetlight was further up the road, and he claimed to have identified four people,” she said.

“I worked out and showed them that the time that it takes for a car travelling at 15 miles per hour to cover 25 feet is a fraction of a second, and somebody who comes under fire at night is not going to be able to properly identify these persons,” she said.

Jobson said her client had always maintained his innocence but acknowledged that his reputation had not helped his case.

However, she said he is happy to have regained his freedom as he had been incarcerated at the age of 21.

“He is mostly looking forward to relaxing, spending time with his children, and maybe writing a book. He is a good writer,” she said.

Fletcher declined comment until the written judgement is released.

Peterkin, on the other hand, said that he had always viewed the appeal as credible based on the inadequacies of the identification evidence.

“The no-case submission should have been upheld,” he said.

Peterkin said that the family of Allen, his newly freed client, was planning to help him set up a business.

Allen had learned tiling and might also pursue prospects in that trade.

On the blowback in some quarters to Linton’s acquittal, Peterkin said: “The justice system is based on principles on the law, which is there to protect every single soul.”

“... Normally, people will talk about what other people are supposed to get until the shoe is on their feet.”