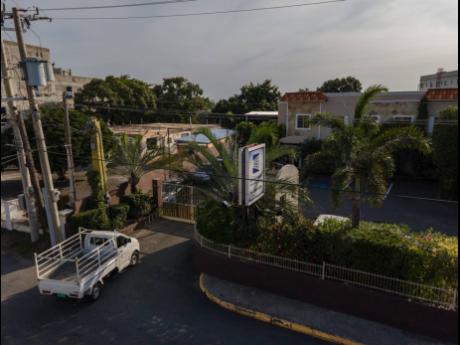 Gladstone Taylor/Multimedia Photo Editor
A vehicle prepares to enter the grounds of Caledonia Outdoor Advertising Limited on Phoenix Avenue in St Andrew on Thursday. The company yanked correspondence threatening staff that they could lose their jobs if they did not get immunised against the coronavirus.

Bosses seeking to stipulate employee vaccination against COVID-19 as a condition of work have been warned that they would be hard-pressed to impose that standard on the grounds of public safety.

Emile Leiba, president of the Jamaican Bar Association, said if any company sought to make immunisation a pre-employment condition, it would be hard-pressed to prove that “you being vaccinated would help to protect the other employees”.

Leiba, who specialises in employment law and civil litigation, said the introduction of mandatory vaccination as a condition of employment “will have to be backed up by a certain degree of medical science”.

Vaccination does not shield inoculated persons from contracting or spreading the virus but significantly diminishes health complications and vulnerability to death.

He also said that that prerequisite could only theoretically exist in an environment where vaccines were readily available for a mandatory obligation to be enforceable.

Jamaica has administered more than 135,000 doses of the Oxford-AstraZeneca vaccine, which represents about seven per cent of the 1.9 million people targeted for immunisation. Less than 4,000 doses are currently in the country.

All persons will need a second dose for optimal immunity.

The Bar association head told The Gleaner that “a unilateral imposition of new terms of employment after the employee has already signed a contract is generally not permissible under our employment law”.

Leiba’s warning coincided with the Ministry of Labour and Social Security’s urgings for workers to report threats by employers that are considered an infringement of their civil liberties.

The ministry instructed workers in all fields to report bosses to the Labour Division if their actions could be deemed prejudicial towards their decision to not be vaccinated.

The terse warning to employers appeared to be sparked by the April 12, 2021, memorandum from Caledonia Outdoor Advertising Limited that mandated staff members to get vaccinated against COVID-19 or risk termination.

The memo issued by Caledonia gave staff a 14-day ultimatum to get the jab, citing “the company’s COVID-19 protocol”.

Caledonia yanked the resignation threat, which was issued under the signature of director Robert McCook, amid smouldering resistance by staff.

In a reversal, the advertising company said that “team members who, for medical reasons, cannot be vaccinated, can provide written exemption reports from their doctors.

“They have also advised team members that none will be asked to resign if they fail to receive the vaccine,” a press statement issued on Thursday said.

O’Neil Grant, president of the Jamaica Civil Service Association, said that “no employer can make the taking of any vaccine mandatory”.

Grant said that employees cannot be terminated although some organisations could pressure staff to resign. He pleaded with employers to understand that resignation is voluntary.

The Ministry of Health and Wellness is seeking to achieve herd immunity of 65 per cent immunisation of the population by March 2022, but the Government has made it clear that vaccination will not be mandatory.