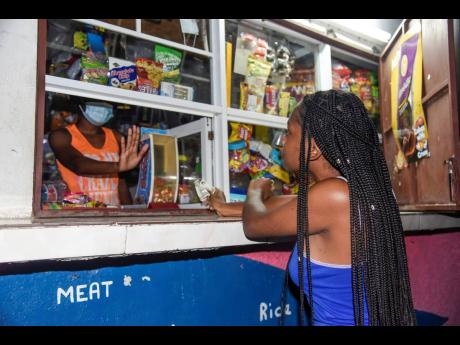 Nicholas Nunes/Photographer
A shopkeeper rejects the cash from a customer at a corner shop on Olympic Way, in Andrew Holness’ St Andrew West Central constituency, on Thursday evening. Corner shop operators are divided on the prime minister’s criticism of COVID-19 breaches. 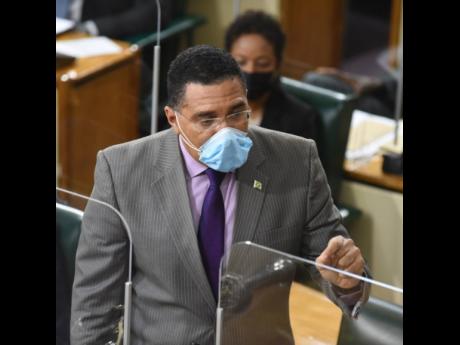 Some shopkeepers in Prime Minister Andrew Holness’ St Andrew West Central constituency are seething from his comments about COVID-19 safety breaches which have been construed in some quarters as classist.

In citing reasons for three consecutive weekend lockdowns which commenced on March 26, Holness noted that the failure by some, including those in the lower socio-economic strata, to adhere to infection-prevention protocols contributed to the decision.

“We have to lock down because the persons who are going to the corner shop on a Sunday or a Saturday, or whichever day, to buy the two pounds of rice, the big gill of oil, the half of bread … those persons are not wearing their masks, they are not social distancing,” Holness said in response to a specific scenario raised about conduct at so-called corner shops during a Jamaica Observer interview.

The prime minister has since got flak for his statement.

“What the prime minister said a foolishness. Him just a pressure poor people from all angle. That him a do,” lamented Mark Cash, a selector who these days has to rely solely on the small shop he operates off Seaward Drive to eke out a living.

The small business owner pointed to a bottle of hand sanitiser on a counter separating him from customers and a small bag of masks hanging over his head, which he sells to those who are not wearing one. He said he also complies with the curfews.

“As it turn five minutes to eight, police come lock mi off a night-time,” he said.

Mark Cash agrees that some people are unruly, and not everyone abides by the law, but he is concerned about the reluctance of national leaders to acknowledge their own contribution to the spiralling COVID-19 numbers.

“Him say is the Independence (Day) weekend spread the corona. All now him don’t say is the election,” he noted, adding, “They don’t put no blame on themselves.”

Opposition Leader Mark Golding has criticised Holness’ remarks as evidence of disrespect to the poor, and ventured into his own St Andrew South constituency recently to hear the views of shopkeepers in a self-produced video.

But Wayne Chin, who operates a small grocery shop near Olympic Way, believes the prime minister is being unfairly criticised for the statements being attributed to him.

St Andrew West Central has been a Labourite stronghold since Holness defeated Warren Blake of the People’s National Party (PNP) in the 1997 general election.

Chin, a self-professed PNP supporter, said the prime minister and MP was not being disrespectful of the poor.

“All he said is that persons living in the ghetto, areas like these, when they go to the corner shop to buy half a bread, pound of rice, whatever, they don’t tend to wear their masks, and I replay it over and I don’t see nothing wrong with that statement,” said Chin, who does not live in the community.

He said that for the most part, customers have been complying with the requests to wear a mask to enter his shop, but there are occasions when a customer might disobey the rule.

The shopkeeper said that he has had to refuse to sell goods to customers who are not compliant with the state-ordered COVID-19 safety protocols.

But some residents are insisting that there is no need for mask-wearing. Linton Thompson, a carpenter who was spotted at a patty shop off Olympic Way, has personally taken issue with Holness’ comment.

“Mi a Labourite, but it bun mi fi dem talk deh,” he retorted.

Thompson said that he and many others in the community have not been infected by COVID-19, although they party and have a good time.

“It’s not that I am not afraid, but COVID is mostly old people and people with underlying sickness get it, and from I have been here, I don’t see anybody catch it that I know,” he said.

Pauline Jones, who operates a shop along Bay Farm Road, said there are occasions when customers do not wear their masks. But she generally adjusts the one on her face to indicate to them that they should be wearing one as well.

Jones said that getting shopkeepers like herself to close at 8 o’clock at nights is not an issue, given the volatility of the community.

“Around here, if they even say 10 o’clock shop should shut down, by 8 o’clock we are closed,” said Jones, who inherited the shop from her husband who died last year.