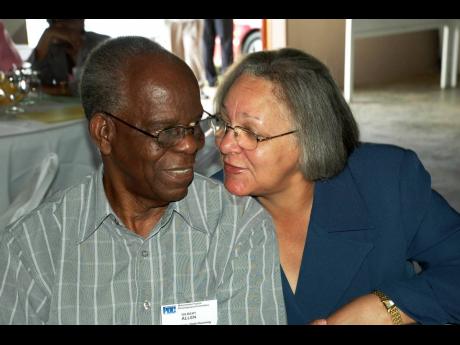 File
Then custos of Manchester, Dr Gilbert Allen, is seen in a cosy moment with wife Georgia at the Kendal Conference Centre in the parish in 2007. Allen died on Thursday aged 92.

The late Dr Gilbert Allen has been praised by civic society as an outstanding public servant who was a reservoir of wisdom and whose charm endeared many.

Admirers hailed the physician’s legacy of service as timeless.

Sally Porteous, who succeeded Allen as custos in 2011, said she was privileged to have been guided by the stalwart when she assumed office.

“He was a great man who gave incredible service to the parish. Everybody loved and admired him,” said Porteous.

“I used to go and sit with him and he gave me so much advice and always made me feel that I could call on him at any time.”

Allen served as custos of Manchester for 17 years, beginning in 1994, and juggled those duties even while he tended to thousands at the Mandeville-based Consolidated Health Services, where he was also managing director.

Born to Jane Allen and James Allen, a tailor, on March 25, 1929, Allen was educated at Andrews University in Michigan and Howard University in Washington.

Allen, a Seventh-day Adventist, would have celebrated 50 years of marriage to Georgia Heron-Dunn in December.

“In his early days, he was the main surgeon at the Mandeville Regional Hospital and he served his community well. ... He offered himself to be of service to the people of Manchester … ,” Reid said.

Allen, a former Kiwanian, is said to have been selfless even in sickness.

“My fondest memories of him were how he always showed much strength and exuded positive energy as best as he could, and he never failed in sharing advice and encouragement with me,” Custos Garfield Green said in a press statement issued on Friday.

“We have lost someone who was considered to be gentle and kind, and one who has given much, through service, to the people,” he added.