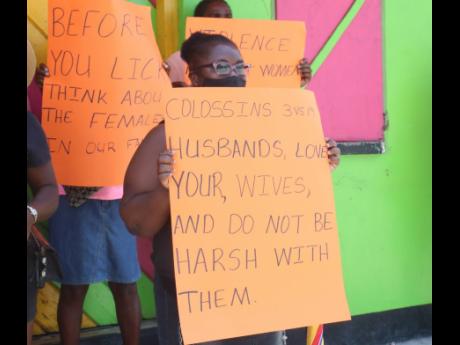 Ashley Anguin/Photographer
Protesters gather at the town square in Whithorn, Westmoreland, on Friday demonstrating against violence against women.

As the embattled Westmoreland Central Member of Parliament (MP) George Wright grapples with assault allegations, several residents of the constituency came out in a show of force in Savanna-la-Mar and Whithorn on Friday to protest violence against women.

From as early as 10:45 a.m., the Savanna-la-Mar protesters, who were later joined by supporters from neighbouring Petersfield, gathered in the town square chanting ‘stop the violence against women’. They hoisted placards bearing pointed messages such as ‘Central Westmoreland deserves better’ and ‘No cover-up in this one, no place in Parliament for you’.

Over in Whithorn, the protesters’ messages were equally condemnatory, as they chanted ‘No more beating’ while wielding placards saying ‘Be a lover, not a beater’ and ‘Where are the morals in our males?’

Julian Chang, secretary of the Central Westmoreland Women’s Movement and one of the leaders of Friday’s protest action, said that her group wants the Domestic Violence Act amended.

Cabinet is expecting to sign off on amendments to the act, including an increase of the penalty for breaching a protection order from J$10,000 to J$500,000 or one year’s imprisonment.

“One of the main issues we want to speak on today is the amendment of the Abuse Act [Domestic Violence Act], because right now we have it as a protocol where we have to have a complaint registered at the police station. We are asking the Parliament to do some amendments as it relates to that,” said Chang.

“We are not here because of politics; we are here because of the women of Jamaica and around the world. I am also a victim of domestic violence and this is the first time I am speaking of it, because Jamaica deserves better and women deserve better,” said Robinson.

Wright was thrust into the national spotlight following the circulation of a video on social media in which a man is seen physically assaulting a woman.

Wright, who was named as a person of interest in the matter, was subsequently interviewed by the authorities at the Freeport Police Station in St James on Wednesday, April 14, and released without charge.

The Jamaica Labour Party reported on Friday that Wright was now an independent member of the House of Representatives and is expected to withdraw from the Government’s parliamentary caucus following a meeting with party officials a day earlier.