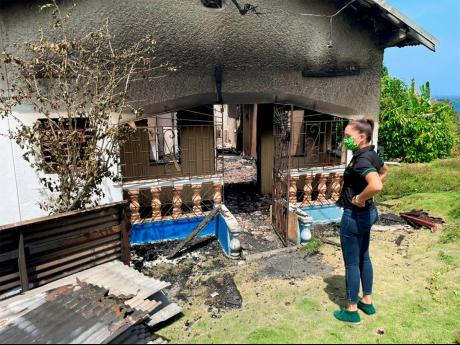 Photo by Gareth Davis
left: Portland Eastern Member of Parliament Ann-Marie Vaz was teary-eyed as she surveyed the wreckage of the late Isolyn Christie’s home on Monday. 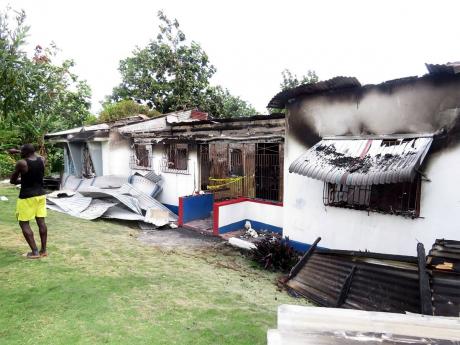 Photo by Gareth Davis
The five-bedroom home in Black Rock, Portland, where 88-year-old Isolyn Christie died in a blaze on Sunday night.
1
2

It was close to eight months that Tony hadn’t seen his aunt, Isolyn Christie.

As he surveyed the fire-ravaged concrete home in which the 88-year-old perished, Tony appeared to rue having not visited her more often before he was robbed by fate.

As tears rolled down his cheeks, Tony, who declined to disclose his surname, was a sorry sight of regret.

The elderly woman, who lived alone, was last seen alive by a taxi driver shortly before the 2 p.m. Sunday curfew during a visit to her home.

“Mi never expect nothing like this fi happen to auntie,” Tony said.

“I should have visited her more often, but work prevented me from doing so, although me always think about her.”

The scorched house bore telltale signs of the torment the octogenarian suffered as residents and relatives were repelled by the searing heat of the blaze.

Tony, who described the raging fire as hell, said that Christie’s ordeal was unimaginable.

“She bun from her torso; down to her foot bun off. Dem still have her remains on di grung (ground). Di funeral home never take up all o’ her, so some of her remains still inna di house,” he told The Gleaner.

Firefighters received a call shortly after 10 p.m. Sunday, but by the time they arrived, the house at Old Road had already been engulfed in flames.

Assistant superintendent of the Port Antonio Fire Brigade, Everald Brown, said that there was very little fire crews could do to save life or property.

“They (firefighters) were informed that the owner of the house was believed to be trapped inside. At the time, the rescue operation was completely impossible due to the state of the fire,” Brown further said.

Dozens of onlookers reportedly stood by helplessly as the late-night inferno swept through the house of the senior citizen.

Gary Anderson, a taxi driver who regularly transported Christie to the Portland capital, Port Antonio, remembered her as a caring woman who got along with everybody.

“Mi see her yesterday and she say that she cook her dinner and was going to lie down and read her paper. A one good woman to me, and me just caan believe,“ Anderson said.

Portland Eastern Member of Parliament Ann-Marie Vaz, who visited Black Rock on Monday, broke down in tears as she viewed the wreckage.

“This unfortunate incident has affected just about everyone in the Black Rock community who knew her. ... The entire district has plunged into mourning,” Vaz said.