Vaccination too late to save Teapes after half a century together 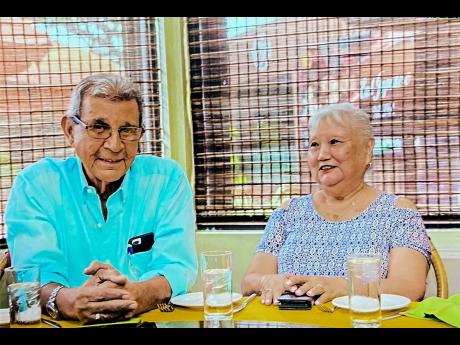 Contributed
Leslie Teape, 82, and wife Anne, 74, died less than an hour apart from COVID-19 and around two weeks after being vaccinated.

Anne Chin-Teape and Leslie Teape were scheduled to get their second dose of the Oxford-AstraZeneca shot in May, but that dream will forever be deferred after the couple, who have been together for more than 50 years, died less than an hour...

Anne Chin-Teape and Leslie Teape were scheduled to get their second dose of the Oxford-AstraZeneca shot in May, but that dream will forever be deferred after the couple, who have been together for more than 50 years, died less than an hour apart at the National Chest Hospital on April 6.

Both senior citizens had been diagnosed with COVID-19 prior to being admitted to the hospital on April 3. The cause of death on both medical certificates, which The Gleaner has seen, is respiratory failure due to COVID-19 infection.

Leslie Teape Jr said that his father was first vaccinated on March 25 and his mother was inoculated two days earlier. He said both were fine after getting their shot but then his father, who has an underlying medical condition, started feeling ill later that week.

The couple, who lived alone, registered positive results from their COVID-19 tests.

Concerned that the Teapes’ health was deteriorating, their priest at the Holy Cross Church, Father Arokiadas Arumainathan, arranged for an ambulance to take them to the hospital. Three days later, Teape Sr, 82, died some time after 2 a.m., while his 74-year-old wife took her last breath less than an hour afterwards.

“She asked to be put right beside him, so they actually died right beside each other,” said Teape Jr, 53, who resides in the United States.

“The hospital staff was very kind enough to move the oxygen and move everything so that she could be right beside her husband,” confirmed Arumainathan, who is affectionately called Father Francis. The priest said he maintained contact with the couple during their hospital stay.

Teape Jr is the only child for Anne, but his father also has three other children. One of those children, The Gleaner was informed, is currently still admitted and is receiving treatment at the National Chest Hospital for COVID-19.

The other two siblings live overseas.

The Teapes were known for their generosity and have been involved in several projects to help the poor over the years.

Anne had worked at the now-defunct Air Jamaica for more than 30 years, while Teape Sr owned a sand-blasting company.

Father Francis said the couple played an active role in the church community.

“Both of them were very loving, very God-fearing, and people who were very dedicated to God and to church, and so they were faithful in coming to church every Sunday morning from early,” said the priest.

The Teapes were particularly involved in the feeding of the street people during Christmas time, the priest said.

Father Francis said he was aware that they had been vaccinated and that he had encouraged them to get a COVID-19 test when they started feeling sick.

The priest, who was in communication with the couple, said he spoke to Anne the Monday night and had even texted her in the wee hours of Tuesday morning, not knowing that she had died.

“It was a great shock to the parish and to myself,” he said.

Dr Melody Ennis, director of family services in the Ministry of Health & Wellness, said that up to Monday, she had only received 76 notifications of adverse reaction or side effects from persons who have taken the vaccine. She said she was only aware of one person who had taken the vaccine and had died thereafter.

More than 135,000 Jamaicans have received the first dose of the vaccine.

“A person died after receiving the vaccine. Now there is no link or causal relationship between that,” she insisted.

“It is just a report that after a vaccine, a death occurred,” she said.

When asked about the Teapes’ case, she said that she was unaware of that development.

Ennis, Jamaica’s vaccine czar, said that the inoculant does not prevent someone from contracting COVID-19, especially because immunity does not take effect immediately.

Senior medical officer at the National Chest Hospital, Terry Baker, confirmed that the Teapes’ were patients there and had died, but said that she could not provide further details without written consent from their family.

Baker, too, emphasised that “it is not to be said that persons who have received one dose of the COVID vaccine can’t get the virus”.

Pointing to anecdotal cases of persons becoming ill after getting immunised, Teape Jr suggested that the authorities consider testing vaccine candidates for COVID-19 before receiving the jab.

But Ennis shot down that idea.