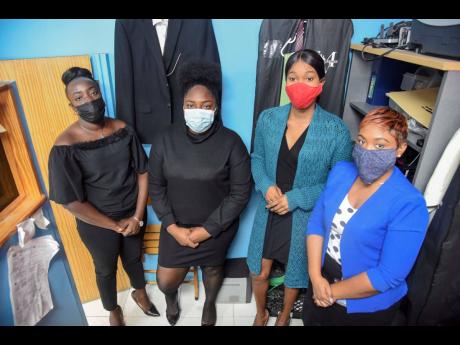 Nicholas Nunes/Photographer
From left: Kerry-Ann Goldson, Oluwafunke Bayeshea, Isha Nation and Kerry-Ann Simpson stand inside the office of Michael Sharpe, who died in hospital on Tuesday.

Chief Medical Officer (CMO) Dr Jacquiline Bisasor-McKenzie has dismissed speculation that the death of veteran broadcaster Michael Sharpe on Tuesday was linked to the Oxford-AstraZeneca vaccine he received on Sunday, March 14.

Speaking with the consent of Sharpe’s family, Bisasor-McKenzie disclosed that shortly after being inoculated, Sharpe began to show signs of being COVID-19 positive. As his symptoms worsened, he was hospitalised on Wednesday, March 24 and remained there until his death.

Bisasor-McKenzie cautioned that it was too early to determine the cause of death.

At Radio Jamaica’s Lyndhurst Road premises where JNN is located, staff, some of them dressed in full black, were reeling from the news of Sharpe’s death on Tuesday.

Production and administrative coordinator for the cable department, Kerry-Ann Goldson, said she was shell-shocked.

“I heard it on a item of breaking news. I was in the bathroom and I ran out and I said, ‘What?’ ... And when I checked, things were coming up on Instagram, and I’m saying, ‘Gosh! This cannot be real,’” she said.

Oluwafunke Bayeshea, who knew Sharpe as a lecturer before he recruited and trained her to be the reporter and producer she is today, said the late broadcaster’s selflessness was one of his outstanding features.

“He pushed me a lot out of my comfort zone because I am very reserved, so he was always on my case. So I am very happy that I was able to learn so much from him,” she recalled.

And it was Sharpe’s patience and determination to transform her into a JNN reporter, presenter, and producer that endeared him to Kerry-Ann Simpson.

“It was quite humbling to work with him. He had big plans for all us over here. He gave so much of himself,” she said.

Meanwhile, Bisasor-McKenzie has emphasised that even after receiving two doses of the vaccine, full immunity does not trip in until about 14 days afterwards. .

Sharpe had a heart condition, one of the underlying illnesses that makes persons particularly vulnerable to the ravages of the coronavirus.

“The vaccine does not have any virus in it, so it will not cause COVID, and the likelihood of any severe reaction to the vaccine is very small – a really low risk of getting of any kind of severe complications,” the CMO said.

The Ministry of Health reported last week that it was probing one suspected death in relation to vaccination.