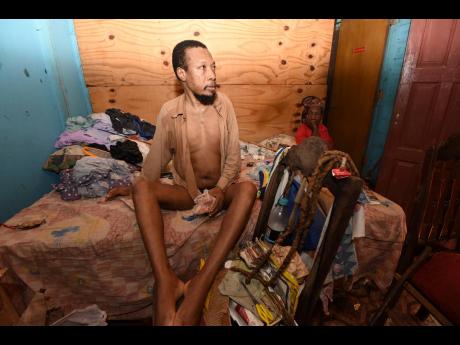 File
In this September 2020 file photo, Easton O'Haro, 56, of Pear Tree Grove district in St Mary, sits with his mother, Norma. The octogenarian has since died, leaving him in the care of his niece, Cassandra. Easton has been paralysed since he was a teenager.

Increased household care work caused by COVID-19 displacement in Jamaica has disproportionately affected women, making them more likely to lose out on jobs because of traditional expectations of unpaid domestic labour.

Eighteen per cent of the Jamaican population - 13 per cent women - indicated that greater care workload diminished access to employment, a study by think tank the Caribbean Policy Research Institute(CAPRI) showed.

Poor and female-headed households have been the worst-affected victims of the coronavirus pandemic in Jamaica and the Caribbean, making them, paradoxically, the greatest casualties of the economic fallout of the containment measures geared towards their survival.

The care work findings corroborated a time-use study undertaken in the 2018 Jamaica Survey of Living Conditions (JSLC) which revealed that Jamaican women carry a greater burden of unpaid domestic and care work in the home.

The JSLC research showed that women spend an estimated 294 minutes – or about five hours – carrying out these tasks daily, compared to men’s 172 minutes, or just under three hours.

CAPRI’s research showed that at least half the respondents in each of the four countries reported a temporary suspension or lay-off from work without pay. Poor households were twice as badly affected as non-poor families.

Based on data collected, “women are impacted two and a half times as much as men are,” the study said.

While more male households suffered temporary lay-offs, more matriarchal homes were hit by permanent time off from work, as female-dominated jobs were most affected by the COVID-19. The affected jobs ranged from teaching to domestic labour.

The care work findings were evidence that gender, and not only incomes, had a hand in families’ fortunes amid the pandemic

Care work includes the responsibility of caring for children, which has increased with the closure of schools and the added scrutiny needed to protect the home from infection, especially with family members with comorbidities.

Cassandra O’Haro, a 32-year-old living in Pear Tree Grove, St Mary, was the main breadwinner of her family earning an income from being a practical nurse. However, the nursing home where she worked was shuttered by the pandemic.

O’Haro has since sought employment in a doctor’s office that paid her $10,000 for a seven-day workweek, 50 per cent less than her earnings labouring six days a week, when she occasionally clocked overtime. Transportation per week totalled $7,000.

“With the passing of my grandmother, I resigned because my boss told me that I had to sign a contract for $8,500 per week, and I couldn’t work with that,” she told The Gleaner on Tuesday.

O’Haro had been helping her grandmother to care for her uncle, Easton O’Haro, who is unable to move around by himself. She has since died.

The practical nurse, who is mother to a nine-year-old boy, said they have been surviving mostly from her savings. Her partner is a construction worker but that source of income is unstable, said Cassandra.

The CAPRI report showed that 11 per cent of persons in the Caribbean were prevented from being gainfully employed because of increased care work.

Much like O’Haro’s household, the study showed that most poor families, 65 per cent, resorted to their savings to keep their households alive. From non-poor families, 33 per cent had to do the same.

Other persons opted to plant home gardens, engage in farming, seek another job, or borrow money.

The survey conducted did not allow for a comprehensive analysis of the impact on youths.

While the Mottley administration had already provided unemployment benefits as part of the social insurance system for Barbadians, the Jamaican and Trinidad and Tobago governments have had to implement temporary financial support programmes in an effort to ease the impact of COVID-19.

The COVID-19 Allocation of Resources for Employees programme was implemented in Jamaica and the Salary Relief Grant introduced in Trinidad. None was set up in Antigua and Barbuda.