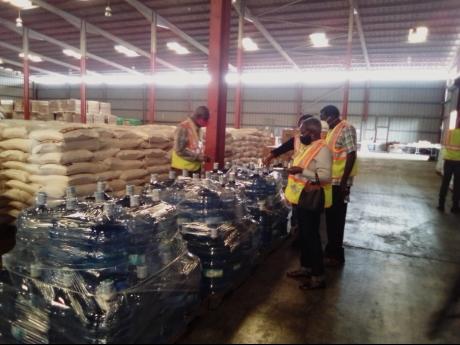 Food for the Poor through its Florida-based office has shipped 10 container-loads of relief supplies to St Vincent and the Grenadines to help the people affected by the La Soufrière volcanic eruption.

Some 16,000 people, majority of them living in shelters, have been forced to evacuate their homes.

Kivette Silvera, executive director of the Spanish Town-based headquarters of Food For the Poor said the organisation has also sent two container-loads of water donated by distribution and manufacturing company Wisynco and six pellets of disaster kits.

"Once we heard that there was an issue, our Florida office quickly jumped into action," Silvera said.

She also said Food for the Poor will help even after the emergency phase.

Honorary Consul of St Vincent and the Grenadines June Barbour is grateful for the assistance.

She has painted a grim picture of the conditions in the volcano-hit Caribbean country.

"Everything above ground is damaged, the agricultural sector is decimated and cannot be recovered anytime soon, trees have been broken, vegetables destroyed, the ash has destroyed the grassland and the livestock," she said.

According to Barbour, most farmers were preparing to reap their crops to supply existing markets in Trinidad and Barbados, but have now suffered great loss.

She also said the water resources both land and sea have been affected by the eruption.

Rivers, for example have turned into steaming streams going out as far as three miles into the sea.

St Vincent COVID vaccination programme is also being affected by the displacements caused by the volcano.

"Many people in the shelters have been receiving vaccines, once they got to the shelters they would have received vaccines, so that has been resolved at a certain level, but because of the continued eruption other people would not have been able to easily access vaccines because of limited outside movement."

Meanwhile, Barbour said discussions have started about the resettlement of residents who lived in the area designated as the red zone.

However given the complexities involved in construction and the immediate emphasis on restoring agriculture it might take some time for these settlements to be established.

She said neighbouring governments, OECS countries, other Caribbean countries, the United States and the United Kingdom have been helping.

Food for the Poor is now conducting a relief drive for St Vincent and is appealing to individuals and corporations to support it.

Donations may be made to:
National Commercial Bank
Account # 471043885
or via www.foodforthepoorjs.org