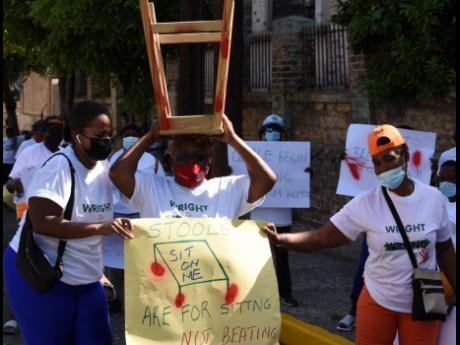 Ian Allen/Photographer
Scores of protesters demonstrate against domestic violence near the Parliament building on Duke Street, Kingston, on Tuesday. 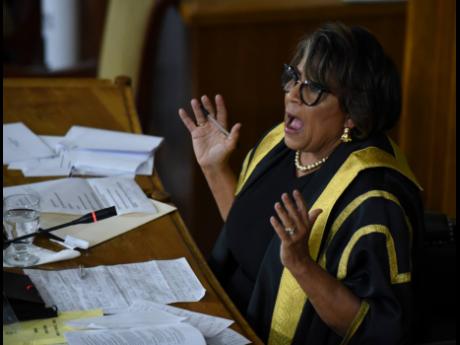 Ian Allen/Photographer
House Speaker Marisa Dalrymple-Philibert is animated as she addresses lawmakers in the House of Representatives on Tuesday. 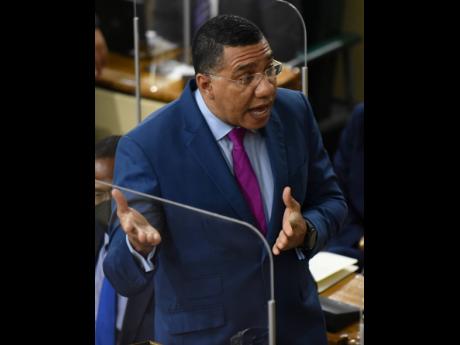 Ian Allen/Photographer
Prime Minister Andrew Holness making a statement on gender-based violence during the sitting of the House of Representatives on Tuesday.
1
2
3

Flagging public outrage over a domestic violence scandal, House Speaker Marisa Dalrymple-Philibert called out the Opposition on Tuesday, pushing for there to be a definitive statement on whether members of parliament who are involved in criminal proceedings should be suspended.

The exchange at Tuesday’s sitting of Parliament came as the Opposition sought to move a motion to have under-fire Westmoreland Central Member of Parliament George Wright suspended.

There was a criminal investigation involving Wright, but the police have since closed the case.

Natalie Neita, who sits on the opposition benches, is involved in an assault case. That case is still in the courts, although it had been recommended for mediation.

“If this is a cleansing, let us be total and honest. Am I hearing from the Opposition that at this point, where we have matters that we can do something about and that are wrong, are so established to be wrong, that we should do something? Is this what the Opposition is saying?”

The speaker said that she would facilitate and balance the scales if that was the intention of the Parliament.

“If there are matters for which there are criminal charges that are presently in our courts that speak to behaviour that we will not tolerate, are we saying that any member so involved, you are moving and you are prepared to move for a suspension of that member,” she further questioned.

But Golding said he was not prepared to engage in generalities, as the motion tabled by the Opposition was directed at Wright.

The motion was eventually tabled and is to be debated at a later date.

Women members of parliament delivered a scathing rebuke of abusers on Tuesday, most of them donning black outfits to emphasise their revulsion against violence.

Wright’s name was the last to be called at Tuesday’s sitting, but there was no answer when the clerk of the House made the call.

That’s because he has proceeded on leave of absence from the House of Representatives.

That confirmation was announced by Dalrymple-Philibert, who led the charge in the repudiation of violence against women and toxic masculinity.

She, however, did not give a reason for Wright’s leave of absence, nor did she say for how long.

“Together we feel the urge at this time to come together in solidarity with our sisters, our women who are in the line of fire from the lethal forces of domestic violence most often meted out them by men who may be their intimate partner, their co-workers, their family members, or simply their community members,” Dalrymple-Philibert said on behalf of the women in the House.

The speaker called on women to speak up against the abusers and resist the urge to remain silent and blame themselves for the brutality they receive from men.

Prime Minister Andrew Holness, in reaction to the statement, argued that the accusation against Wright has the potential to undermine the credibility of the Government’s push to curb violence against women.

“Like all well-thinking Jamaicans who saw the viral video circulating, I was outraged at the display of violence. Subsequent allegations that a person captured in the video is a member of parliament placed a new disturbing dimension to the issue,” Holness stated.

Wright had been identified as a person of interest in the viral video of a woman being beaten but the footage was deemed inconclusive.

Emphasising that domestic violence was not a political issue, Holness said legislators have a higher duty to be on the right side of history.

“If we are not seen as exemplifying the law and believing in what we preach, our electorate and the wider society will not take us seriously and worse they will not trust us,” Holness said.