Sharpe as a razor 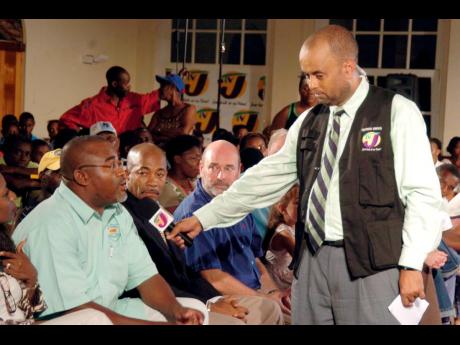 When Michael Sharpe came under the wings of news editor Janet Mowatt at RJR in 1983, she recalled the energy and enthusiasm that the cub reporter had on assignments.

It was that youthful zeal that colleagues say propelled him to become one of the most recognisable faces in Jamaican journalism, endearing thousands with his down-to-earth charm and wit.

Sharpe, 65, died at hospital on Tuesday after ailing for some time.

The late broadcaster was regaled with tributes, including from Governor General Sir Patrick Allen and Prime Minister Andrew Holness.

Sharpe, who cut his teeth at The Gleaner before branching out into broadcast, was the news operations manager at the Jamaica News Network, an affiliate of the RJRGLEANER Communications Group.

Janet Mowatt, former RJR news editor, remembered Sharpe as a go-getter with a keen nose for the news from the time he started working at the radio station in 1983.

“He was the first person in the news car, and he never said no to an assignment. When news was scarce on a given day, he had his contacts, and he always gave an item to the news desk,” she said.

Mowatt disclosed that she had last spoken to Sharpe a few days before his passing. She said that his death has severely impacted both her and other mutual former colleagues.

“I got the impression earlier this week that while he was not doing well, he was improving, so the news of his death came as a shock,” she told The Gleaner on Tuesday, adding that calls had been pouring in from New York and New Jersey.

Stan Reynolds, a former sportswriter who worked with Sharpe at The Gleaner from 1972 to 1975 and then at RJR from 1983 to 1985, described his former colleague as a teacher for emerging journalists.

MORE THAN A REPORTER

Reynolds, who lives in New York, said he was shocked by the news of Sharpe’s passing on Tuesday.

“He [Sharpe] always maintained that he had to be more than just a reporter, that he had to be a mentor as well to younger journalists coming into the field. He saw that as a part of his mission,” said Reynolds.

Granville Newell, a newscaster who worked with Sharpe at RJR before being transferred to the then Jamaica Broadcasting Corporation (now Television Jamaica) newsroom in 1997, remembered Sharpe as a versatile journalist who used his own call-in radio programme, ‘Sharpe Talk’, to help those in need.

Newell was particularly impressed with Sharpe’s ability to negotiate both radio and television.

“Apart from discussing national matters of relevance with his listeners on his show, he would also listen to persons who had problems and would do his best to help them, and he would actually do fundraisers through his show to help others,” said Newell.

Gary Allen, CEO of the RJRGLEANER Communications Group, praised Sharpe for his faithful and long-standing service to Jamaica as a broadcaster.

Among Sharpe’s most noteworthy contributions during his career were his coverage of the United States’ invasion of Grenada in 1983, the coup attempt in Trinidad and Tobago in 1991, a Commonwealth Heads of Government Conference in Uganda, and coverage of elections and of natural disasters like hurricanes Gilbert and Ivan.

Most recently, he was the executive producer of Television Jamaica’s successful 2020 general election coverage.