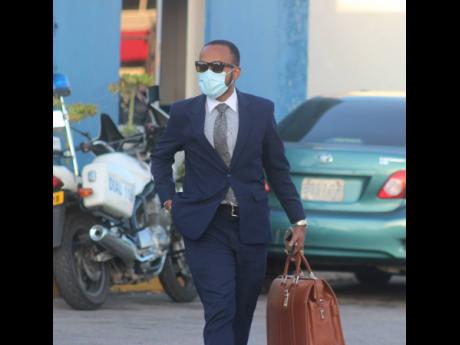 Attorney-at-law Able-Don Foote has sounded a warning that a chorus of public comments about George Wright, the member of parliament for Westmoreland Central, could be construed as defamatory as the police had found no evidence to take action...

Attorney-at-law Able-Don Foote has sounded a warning that a chorus of public comments about George Wright, the member of parliament for Westmoreland Central, could be construed as defamatory as the police had found no evidence to take action against his client.

He said that there has been widespread condemnation of Wright “without lawful cause”.

The politician has been embroiled in an assault saga after a man was seen battering a woman with his fists and a stool. Wright and his partner Tannisha Singh, who had both filed reports to the police, have been deemed uncooperative, forcing the cops to close the case.

“Having regard to the public pronouncement of the police that the investigation has come to an end due to the poor quality of the video footage and lack of evidence in the matter, the multitude of public statements implicating Mr Wright are, in my view, defamatory,” Foote declared in a statement sent to The Gleaner.

According to Foote, the “police have indicated in no uncertain terms that there exists no written statement or witnesses in the matter”.

Further, he said that even with the greatest efforts by the police, the position in law is that the giving of statements by witnesses ought to be voluntary. The attorney made reference to the Court of Appeal case of Dean Palmer v R [2017] JMCA Crim 26.

Foote asserted that the Constitution of Jamaica afforded every citizen fundamental rights and freedoms, adding that individuals who are charged with a criminal offence are presumed innocent until proven guilty.

“However, in the instant case, the treatment of Mr Wright by many seems to run afoul of these sacrosanct precepts afforded to all of us in circumstances where he is not even charged. The law makes absolutely no room for conjecture due to the aged old maxim ‘he who asserts must prove’,” he said.

The attorney cautioned that individuals who publicly commented on the matter implicating Wright, prior to the police concluding their investigations and a court ruling on same, would have put the cart before the horse.

Citing the defamation suit filed by former Prime Minister P.J. Patterson against Cliff Hughes and Nationwide News Network, Foote said the 2014 order for $12 million in damages, along with millions in legal costs, should serve as a warning to critics of Wright.

“A word to the wise is sufficient,” he added.