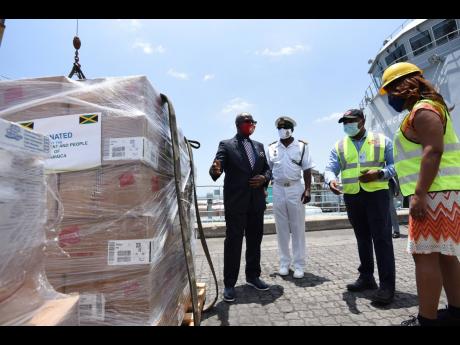 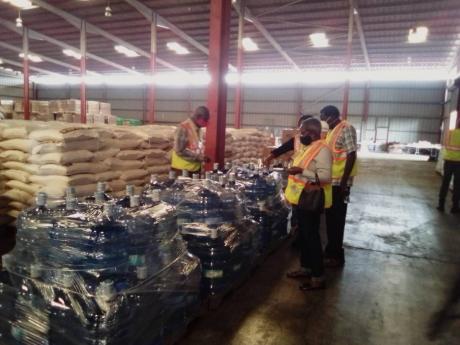 Photo by Ruddy Mathison
Honorary Consul General of St Vincent and the Grenadines June Barbour (foreground), Food For The Poor Jamaica Executive Director Kivette Silvera (hidden) and other officials inspecting the relief supplies to be shipped.
1
2

Jamaica has been marshalling support for thousands of displaced residents in St Vincent and the Grenadines, where the eruption of the La Soufrière volcano has disrupted lives.

Local Government and Rural Development Minister Desmond McKenzie told journalists that the coordination between the Bahamians and the Jamaica Defence Force Coast Guard was an example of strong Caribbean unity, which has served the region well during times of disaster.

“This is not the first time that this vessel has worked with us here in Jamaica to provide relief supplies across the region, and today, I am extremely honoured and proud to be a part of this as we have seen again what cooperation at the highest level can do in times of crisis,” McKenzie said.

“Getting the stuff was easy, but to transport it posed a difficulty that we have faced at all times when we are asked to respond.”

Noting that Jamaica’s response to the disaster was a coordinated effort involving several local agencies, he also thanked Jamaicans who have been making donations to the Office of Disaster Preparedness and Emergency Management’s National Commercial Bank (Oxford Place Branch) account (Number 212387304).

Food For The Poor (FFTP) Jamaica is also noting that its Florida-based partners have already shipped 10 containerloads of relief supplies to assist the disaster-hit country.

“At Food For The Poor, we strongly believe in being our brother’s keeper. Once we heard that there was an issue, our Florida office quickly jumped into action,” said Kivette Silvera, executive director of the Spanish Town-headquartered FFTP Jamaica.

As she hosted June Barbour, honorary consul of St Vincent and the Grenadines, yesterday, Silvera noted that six pallets of disaster kits and two containerloads of water were donated by WISYNCO.

“Among the high-priority items needed are 800- and 100-gallon water tanks, five-gallon buckets, folding cots, respiratory masks with filters, battery packs, bottled water, mattresses, disposable plastic food containers, clothing, and undergarments,” Silvera said, adding that FFTP Jamaica was committed to the effort and would keep lending a hand even after the emergency phase was over.

Even as she expressed appreciation on behalf of the government and people of St Vincent and the Grenadines, Barbour painted a grim picture of the disaster zone.

“Everything above ground is damaged. The agricultural sector is decimated and cannot be recovered any time soon. Trees have been broken, vegetables destroyed. The ash has destroyed the grassland and the livestock,” she said.

Barbour said that most farmers were preparing to reap their crops to supply existing markets in Trinidad and Barbados but will have now suffered great losses.

The water resources – both on land and at sea – have been affected by the eruption, turning rivers into steaming streams going out as far as three miles into the sea, she said.

And even as displaced residents take up places in shelters, the coronavirus pandemic has been looming large.

“Many people in the shelters have been receiving vaccines. Once they got to the shelters, they would have received vaccines, so that has been resolved at a certain level, but because of the continued eruption, other people would not have been able to easily access vaccines because of limited outside movement,” said Barbour.

For persons who have settled in or near the red zone – the area most affected by the eruption – discussions are under way on resettlement. However, because of the complexities involved in construction and the immediate emphasis that has to be placed on rebuilding the agricultural sector, it might take some time for these settlements to be established, said the honorary consul.

She expressed thanks to neighbouring governments, OECS countries, other Caribbean countries, the United States, and the United Kingdom for their responses so far.