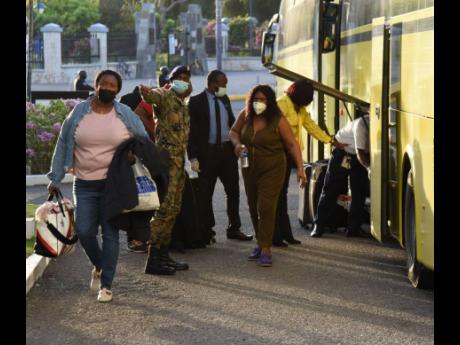 Ian Allen/Photographer
A soldier and other health officials give directives as 27 persons who arrived from the United Kingdom on a repatriation flight yesterday disembarked buses to begin their quarantine period at The Jamaica Pegasus hotel in New Kingston.

Sighs of relief could be heard all around yesterday as 27 persons who entered the island on a repatriation flight from London in the United Kingdom disembarked buses to begin a period of quarantine at The Jamaica Pegasus in New Kingston.

With a COVID-19 variant triggering a ban on flights from the UK since December 22 of last year, some of the travellers were glad for the opportunity to board yesterday’s flight while others spat fire at the frustration they experienced in their extended stay.

Daina-Lyn Swaby completed her university studies last December with the expectation of returning home to her family after a year of being away from home.

“It had been mentally frustrating going through the frequent extensions of the travel ban and not necessarily knowing what’s happening,” she said of the measure that was initially set to expire on January 31 but has been repeatedly extended.

Swaby explained that her family tried to keep her spirits up, but between them having to work and the difference in the time zones, it was extremely strenuous and exhausting.

“Just hoping that the two weeks’ quarantine runs off as quickly as possible,” she said.

Anastasia Myers, a British national resident in Jamaica, said she spent an excess of £15,000 for accommodation during her extended stay.

“It’s been a nightmare. I’ve been living in a hotel for four months with two kids and no kitchen,” she lamented.

She said that her sons had visited her father for Christmas and got stuck once the travel ban was made effective. Unfortunately, they contracted the virus on their trip and, in turn, infected Myers’ dad.

“Flights kept getting cancelled. Then we tried to go through Barbados, and then the [St Vincent] volcano erupted, so this is the first opportunity we’ve had to come back home,” she explained.

Myers said that her boys had been keeping up with their lessons online.

“As the schools were opening while they were in the UK, they were still doing online school with the time difference. So they started at 3 p.m. and finished at 10 p.m. in the UK,” she said.

Kate Moyston, along with her husband, made several attempts to return to Jamaica after burying her mother.

“It really is like a film,” she said, describing the process after the plane touched down.

Foreign Affairs Minister Kamina Johnson Smith said there are still 66 other persons waiting to come back to Jamaica. She said they would be allowed to book flights once the current ban expires on April 30.