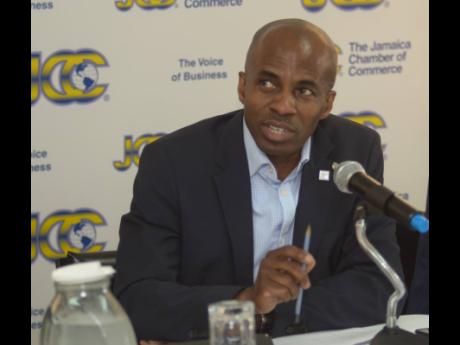 Budgetary challenges have been cited as stumbling blocks to the police force achieving key targets to bolster its capacity to manage crime.

That hurdle is cause for concern for Lloyd Distant Jr, chairman of the Crime Monitoring and Oversight Committee (CMOC), as projects for the procurement of 1,000 body cameras and maintaining a fleet of 3,000 vehicles appear to have missed their fiscal-year targets.

Distant, who on Thursday provided a snapshot of the deliverables that have been agreed on under a national consensus on crime, expressed worry about the progress of the transformation agenda for a force largely viewed as resistant to change.

He said that while there had been noticeable improvements in welfare, force development, and infrastructure, there were troubling deficits in the procurement of equipment and technology upgrades.

“It goes without saying that a poorly resourced, poorly equipped, and poorly trained force will only produce poor results,” Distant said at the virtual press briefing.

Body cameras have long been an imperative in a country where trust in the police is low and firefights are often controversial. Shooting deaths by the police have declined in recent years, but complaints of misconduct filed to watchdog agency the Independent Commission of Investigations rose 49 per cent from 625 in 2019 to 930 last year.

“The projection was to bring in 1,000 new body-worn cameras in this year. We are likely more to bring in 120 additional. I think we have just about 200 in place right now,” Distant said.

The committee chairman noted that the JCF had a deficit of 1,200 vehicles, slowing its ability to mobilise quick and effective response in a diverse landscape of hilly terrains and shanty towns.

A total of 358 vehicles were procured for the JCF during the 2019-2020 fiscal year. This includes 43 retrofitted compact sports utility vehicles that were handed over under the Project Rebuild Overhaul and Construct. The 43 Mitsubishi Outlander SUVs cost approximately $270 million.

Most serious crimes have declined year-on-year, but murders climbed to 428 by April 22 this year, 12 more than for the corresponding period in 2020.

“We are a far cry from where we need to be, and the conversations, they are largely around budgetary limitations that exist,” he said.

Of the six deliverables that were due at the end of March under the CMOC, three are on red, two on amber, and one is on green.

The JCF recruited 300 fewer than the projected 1,000 targeted for the year ending March, and there was no update on the modernisation of legislation covering the interception of communication.

Distant said the committee was satisfied with the work towards improving training, development, and certification although concerns remain about the delay in the implementation of a universal and fully integrated islandwide radio and data communication network.

“A more effective constabulary force does require them to have the tools at their hands to be effective in the job that they do. A major component of that is to ensure communications are in place,” Distant said.