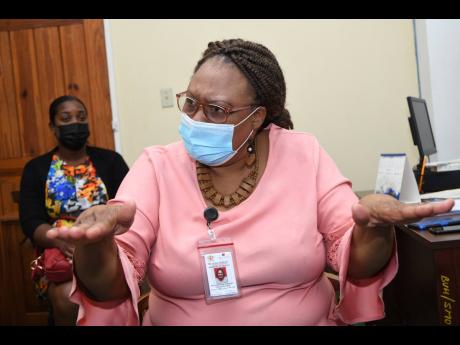 Rudolph Brown
Marcia Mullings Thompson, CEO of the Bellevue Hospital in Kingston makes a point about the COVID isolation ward at the health facility yesterday. 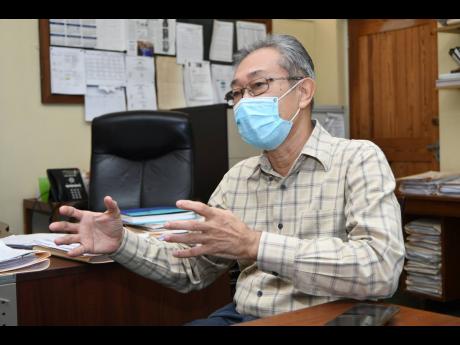 Rudolph Brown
Dr Myo Kyaw Oo, senior medical officer at the Bellevue Hospital in Kingston in discussion with The Gleaner news team during an interview at the health facility yesterday. 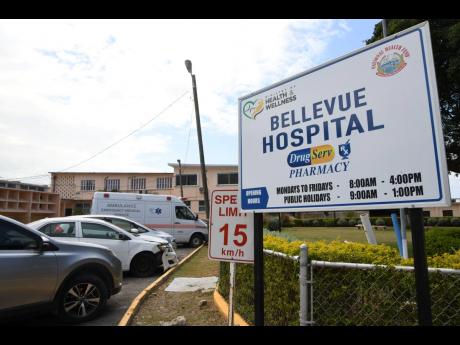 Approximately $10 million was spent to renovate the COVID-19 isolation and quarantine wards at the Bellevue Hospital in Kingston, which can accommodate 30 patients each.

The renovation included purchasing of new beds, installation of partitions, sinks and handwashing stations, as well as painting.

Marcia Mullings-Thompson, chief executive officer (CEO), said the centuries-old hospital, which was opened in 1861, has infrastructure issues. However, she said plans were now underway to carry out a complete restructuring of the facility into a smaller and more manageable hospital.

Last December, the hospital reported a cluster of COVID-19 infections among 21 patients and two members of staff. COVID-19 positive patients range between 22 and 78 years of age. One patient has died.

Senior medical officer (SMO) Dr Myo Kyaw Oo explained that there was a break after the affected people recovered and, since February, they have had “sporadic cases” on wards.

“Now, in our isolation ward, we have 23 patients there, and in the quarantine ward we have 11 persons,” he said.

“It has been very commendable that we really held tight until December, and we are doing our best not to allow for this to exceed what we are currently seeing,” Mullings-Thompson said.

Social cases continue to make up a large percentage of the patient population. Of the 545 patients, more than 400 have already been discharged.

“Our challenge is that we cannot find appropriate places to put them. We don’t have enough infirmaries and we don’t have government shelters,” the SMO explained, adding that the Mental Health and Homelessness Task Force established by Health and Wellness Minister Dr Christopher Tufton in 2016, recommended the construction of a new facility to house said patients.

He said the extent of family support was very limited, as less than 50 patients had been visited by family members.

These visits, he said, were made under rare circumstances, once a year or once every two years.

The CEO pointed out that, when patients were treated close to home, they were less likely to be institutionalised and the family had to take on the responsibility of day-to-day care.

Mullings-Thompson explained that social support was lacking but pointed out that, if community intervention were made available for a significant percentage of social cases, greater focus could be placed on acute and subacute patients.

“We wouldn’t have to be worrying about the older wards that have these operational challenges - the repairs and so on, because we would be able to close some of them. The money is not enough, but we try to manage as much as possible,” she said.

According to Oo, the hospital receives $1.8 billion annually and it costs the institution more than $180,000 per month to feed and care for each patient

“I’m not quite satisfied with the budget that we are provided with for [provision of] quality standards and even infrastructure,” he said.

Oo added that the number of psychiatrists and medical doctors was not sufficient for the specialist hospital.