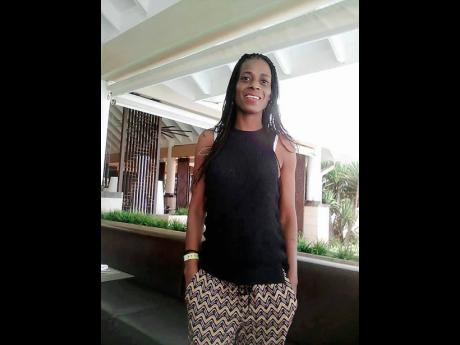 Debbie Powell has been battling breast cancer since February 2018 and is appealing for a fighting chance at life.

The mother of two, a 22-year-old son and a 13-year-old daughter, fears dying and leaving her teen behind.

“I woke up one morning wondering why one of my breasts was firmer and lovelier than the other. I felt something in it like a little dime piece and, within two weeks, it was as big as the palm of my hand,” Powell recounted.

The 41-year-old who resides in Huddersfield, St Mary, recalled that she began panicking and wondering if she had hit her breast, but the thought of cancer never crossed her mind.

Two weeks after her discovery, she visited her doctor who recommended a mammogram and an ultrasound.

The diagnostic exams concluded that she had a mass in her breast and a biopsy, which is crucial in confirming and staging the cancer, was recommended.

“I was a bit apprehensive, so I didn’t do the biopsy. I changed my diet immediately, because I was afraid of chemotherapy,” she told The Gleaner.

Powell also embarked on a programme with a naturopathic doctor and had fairly good results, as she had no pain and there were no physical signs that the mass was increasing in size.

However, she wanted to know what was happening internally and finally decided to do the biopsy in February 2020, which found that she had stage three breast cancer.

Powell, a sports massage therapist at a resort in her home parish, was able to afford treatment from her income but, since the onset of COVID-19 in March 2020, coupled with ill health, she has not been able to work consistently.

As a result, she was not always on track with the new diet and, in some instances, could not afford the full dosages of medication.

Spread to her liver

Late last year, she began experiencing blackouts as well as pains in her stomach and tests revealed that the cancer had spread to her liver.

“The cancer has been aggressive since November. I did not know pain until it moved to my liver. I’m also losing weight, vomiting and I have trouble breathing and sleeping,” she explained.

The most recent series of tests in March placed her cancer at stage four, requiring a double mastectomy, a lumpectomy, liver surgery, as well as chemotherapy and radiation.

Surgeries and treatment will cost more than $4.5 million.

“I have to tell my daughter that I may not live at all. Everytime she says, ‘Mommy yuh need to stop’. The thoughts of leaving my 13-year-old, my baby, it’s painful,” she said in a low tone.

Powell is appealing to Jamaicans and the diaspora to donate well-needed funds.

“To everyone who will give, thank you. To those who are going through a similar situation, I know your pain. For those who can’t give, just offer a word of prayer because God is still in the miracle-working business. He has kept me this long,” said a hopeful Powell.

Use this link to donate: