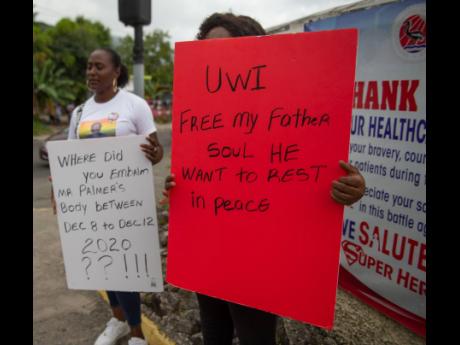 Gladstone Taylor
The Palmer sisters protest at the University Hospital of the West Indies on Friday April 23, 2021 their inability to lay their father to rest. The late Mr Palmer’s attending physician, Dr Jephthah Ford who recently passed had yet to sign the death certificate.

Following the death of Daniel Palmer, 77, at the University Hospital of the West Indies (UHWI) on December 4, 2020, his daughters have been unable to get clearance to bury him, because of what they claim is the disregard being shown to them by the management of the hospital.

Four of his daughters who staged a protest at the hospital gates yesterday said the failure of Kevin Allen, chief executive officer, to meet with them as he had promised was consistent with the level of disregard the hospital has shown to them for more than four months.

“Five months now we a suffer and it wicked pon we. Them have as poor people a take we fi idiot,” Nalika Palmer shared with The Gleaner, as she detailed their anguish.

Palmer was admitted to the hospital with an injured little toe. The toe was infected with gangrene and Palmer died after 11 days but his children have been unable to get a burial order, popularly known as a pink slip, in order to have a funeral. The issue has been complicated by the fact that his body was embalmed in error, Allen has admitted. However, Palmer’s children are claiming that the embalming of their father’s body was deliberate and orchestrated to obfuscate the true cause of his death.

Based on misgivings they had about his sudden death and because he had been hospitalised to have the injured toe amputated, the family contracted Dr Jephthah Ford to conduct a private autopsy. However, the pathologist who died on Sunday, March 28, did not release the findings of the examination, according to the hospital, a claim the Palmer girls deny.

“The body was inadvertently sent to the wrong mortician where the body was embalmed, I believe. So that would have distorted any autopsy result and I am just presuming, I am not a medical doctor,” Allen admitted to The Gleaner.

The CEO contends that the death of Dr Ford before the findings of his examination were released has complicated the issue, since the hospitals’ doctors who did not witness the autopsy were unable to sign off on it.

“Now the burial order, the cause of death was not signed and so without the proper cause of death from that activity it poses a challenge because an external party to our organisation carried out a procedure. We are not there to verify anything, so I have instructed the in-house attorney to reach out to the family attorney for us to have a second autopsy to be performed so that we can ascertain the cause of death. So we can do the release but I can’t ask my doctors to sign off on something they weren’t a part of. It just cannot work like that. So the attorney will reach out to the family and then we will take it from there. That is where it’s at, sir.”

Allen further conceded that he had agreed to meet with the Palmers on Friday but had asked someone to fill in for him but that person never showed up for the meeting.

“True, I met with them (Monday) and I told them Friday but today I am getting the full information as to what has happened and how we are supposed to go about how to deal with it. No, I didn’t meet with them. I had a meeting off the compound so I asked the in-house attorney to meet with them and just now when I enquired, he said that he did not see the family. He was in a meeting and when he went to meet with them, they were not there,” Allen explained.

However, the daughters – Nalika, TracyAnn Palmer, Alsia Palmer Hanchard and Rochelle Palmer made their way on to the hospital grounds yesterday where no one met with them, and as a result they started their protest action, armed with placards and all wearing T-shirts with a smiling image of their father on the front and words of protest on the back. Thereafter, they took their protest to the gates of the institution.

With their mother Jean having died on September 3 last year, the children are haunted by the difficulties they have been forced to endure as they try to bury their father. They have all his burial clothing ready as well as their funeral outfits but can see no end in sight.

“Even put COVID pon it (death certificate) and make we get fi bury him, since COVID a wear,” a desperate Aslia pleaded, her voice breaking.