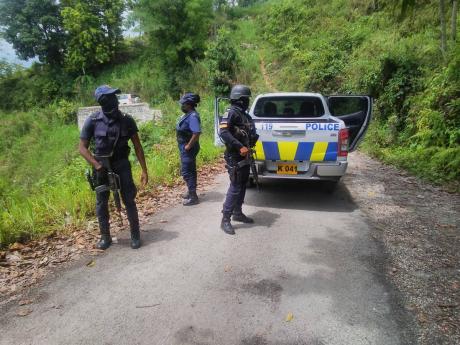 Hopeton Bucknor
Police officers attached to the St Elizabeth Police Division combing a section of Bronte Common community for illegal weapons, at the location where three alleged gunmen were shot and killed Thursday evening after they challenged the police in a shoot-out.

The Independent Commission of Investigations (INDECOM) has commenced a probe into the killing of three men who lost their lives in an alleged shoot-out with the police on Thursday in the small farming community of Bronte Common in Kilmarnock district on the Westmoreland-St Elizabeth border.

Up to late yesterday the police had not released the identities of the slain men. However, based on information from residents in the community, two of the deceased are said to be from Whitehouse, Westmoreland, while the other is believed to be from a Spanish Town address in St Catherine.

Reports by the police are that on Thursday evening, a group of armed men held up a motorist in Whitehouse and robbed him of cash and his Toyota Axio motor car before making good their escape in the stolen vehicle. The victim of the robbery reported the matter to the police.

About 11:20 p.m., the police received information that a vehicle fitting the description of the stolen motor car was seen heading from Whitehouse towards Kilmarnock. The police went in search of the vehicle, which was intercepted in Bronte Common. On seeing the police, the men reportedly opened gunfire on them.

The lawmen took evasive action and returned fire and a running gun battle ensued. When the shooting subsided, the lawmen carried out a search of the surrounding area. During their search, all three men were found suffering from gunshot wounds. The police said a fourth man managed to escape in bushes.

The lawmen seized one illegal firearm and removed a container of gasolene and several cigarette lighters from the stolen motor vehicle.

The three injured men were taken to a medical facility where they were pronounced dead.

Extensive search of the area resulted in the arrest of the fourth man who was found in a house in a nearby community.

When The Gleaner visited the Kilmarnock community yesterday, the residents were not pleased that the robbers had ended up in their community.

“A di first something like this a tek place inna wi community,” Kenrick Allen, a farmer from the community, told The Gleaner. “Mi seh mi inna mi bed wid mi wife, an all of a sudden a pure gunshot mi hear a fire, su me an mi wife haffe hide under the bed, because wi never know what a tek place.”

Dave Lewin, the director of complaints at INDECOM, told The Gleaner that a team of investigators visited the location and carried out an investigation.

“We are fully aware of the incident and can acknowledge that three men have been fatally shot, but I am unable to provide an update at this early stage, as our team of investigators are still out in the field,” said Lewis.