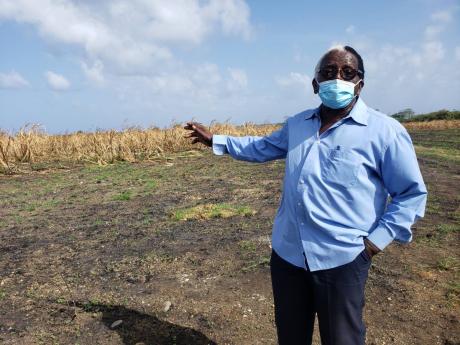 Photo by Shanna Monteith
Pearnel Charles Sr showing the extent of the damage to his cane field in Old Pera, St Thomas, last week. Charles claimed that he lost 500 acres of cane to arsonists over a disputed property.

Seprod Group CEO Richard Pandohie has raised concerns about what he referred to as an escalation in the incidence of cane arson in St Thomas over the last two years. His concerns follow last week’s fiery destruction of more than 100 acres of sugar...

Seprod Group CEO Richard Pandohie has raised concerns about what he referred to as an escalation in the incidence of cane arson in St Thomas over the last two years.

His concerns follow last week’s fiery destruction of more than 100 acres of sugar cane belonging to the Golden Grove Sugar Company, a subsidiary of the Seprod Group of Companies.

While the St Thomas police disclosed that no official report was made, they said they are aware of the incident.

One official, who requested anonymity, said that such acts were usually carried out by disgruntled workers who wanted access to farmlands that are under sugar cane production for animal feed.

“Whereas Golden Grove has exited the sugar-manufacturing business, we continue to grow and harvest cane as a part of the ecosystem for the dairy farms. The losses today from the fire range from J$150 million and have affected over a thousand acres of cane,” said Pandohie, who is also president of the Jamaica Manufacturers and Exporters Association.

The Seprod chief executive said that losses linked to fires are also affecting the company’s ability to divest the shuttered factory.

Seprod wound up its sugar-manufacturing operations last year at a cost of nearly three-quarters of a billion dollars, escaping a failed investment in 2009 that caused its bottom line to bleed.

The Golden Grove woes occurred against the backdrop of allegations by retired parliamentarian Pearnel Charles, Sr that 500 acres of sugar cane he owned went up in flames in a dispute over access to an island in Old Pera, St Thomas.

The property had been captured by adventure-seeking overseas-based soldiers for camping and ecotourism activities. But days after Charles said he told the organisers to leave, community sympathisers set fire to his crop.

Pandohie is urging the arsonists to desist from targeting canefields.

“We have a couple of strong interests, but those were put on hold with the onset of the pandemic, and we are now concerned that the activities of the arsonists will now be a real deterrent to potential investors,” he told The Gleaner.

“We continue to appeal to the residents of the community to let good sense prevail and to create an environment where investors can see that there can be a win-win opportunity for getting back into cane or other manufacturing processes.”