Cops under fire for calling off Wright probe 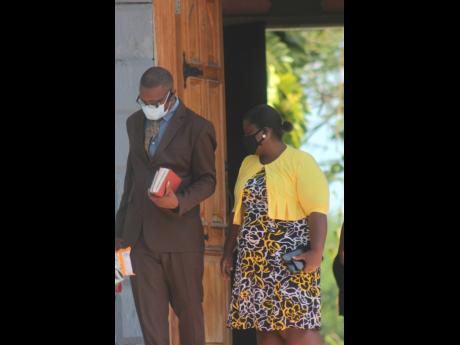 Matondo Mukulu, former acting public defender, has also criticised parliamentarians for not showing the red card to Wright in a scandal that has cost him political capital and threatens to doom his future in Gordon House.

Mukulu suggested that the police’s shutdown of the Wright probe was evidence of a dereliction of duty.

“The JCF does not have a moral obligation to conduct an effective investigation. It has a constitutional duty to conduct an effective investigation, even when there is no complaint. There is video evidence, but we have not been informed what additional measures were taken by the police to verify the identity of the persons on the video,” said Mukulu, who resides in Britain.

Wright, 58, and his partner, Tannisha Singh, 37, both filed reports to the police about an altercation on April 6, but neither party has confirmed whether they are the subjects in a video showing a woman under a attack from a volley of fists and battered with a stool at a Petersfield location.

The politician has been isolated from the ruling party’s parliamentary caucus and gone on a leave of absence from the House of Representatives.

But Mukulu, a barrister, said the police should have told Jamaica if Wright was “specifically asked to account for his whereabouts at the specific time as disclosed on the video”.

The footage has been deemed inconclusive by the police, who have said that the identities of the persons in the recording could not be established.

In a joint statement, the Private Sector Organisation of Jamaica and the Jamaica Chamber of Commerce condemned Wright as unfit to serve as a lawmaker for failing to confirm or deny whether he was the attacker in the April 6 viral video.

“Since at this point, the alleged perpetrator has not publicly insisted on his unequivocal innocence to his colleagues and to the police, he is not of the calibre that belongs in Parliament,” the private-sector associations said.

Mukulu said he was sure that if the police had done thorough investigations, the alleged perpetrator would have been criminally charged.

The United Kingdom-based barrister has also accused Prime Minister Andrew Holness of not being tough enough on Wright.

Jamaica “has been let down by the prime minister, who finds it easier to release statements than to expel the alleged abuser from the Jamaica Labour Party (JLP),” said Mukulu.

“Jamaica was let down by those JLP women MPs who have allowed themselves to be muted in the face of the men in their party, stitching up an outcome which leaves Wright collecting a salary from taxpayers,” he said.

Mukulu also lamented that the groundswell of condemnation had not mushroomed into mass protests across the country.

There have been anti-domestic violence demonstrations in Whithorn and Petersfield in Westmoreland, and outside Gordon House in Kingston, since the Wright assault matter emerged.