Alpha School of Music singing to a new tune 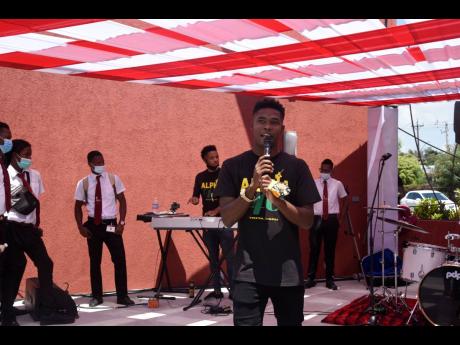 Nicholas Nunes/Photographer
Rohan Mitchell performs with a band from the Alpha School of Music at the opening of the Colm Delves centre on Tuesday. Mitchell has credited the school for the launch of his career in music. 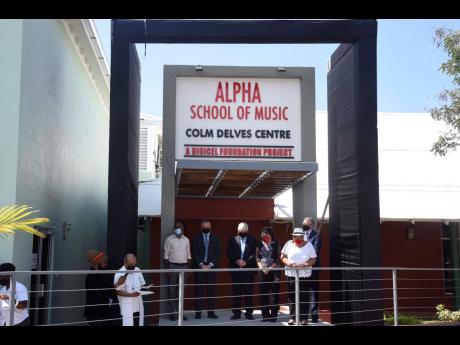 Nicholas Nunes/Photographer
Digicel officials soak up the moment after the unveiling of the Alpha School of Music Colm Delves Centre on Tuesday. 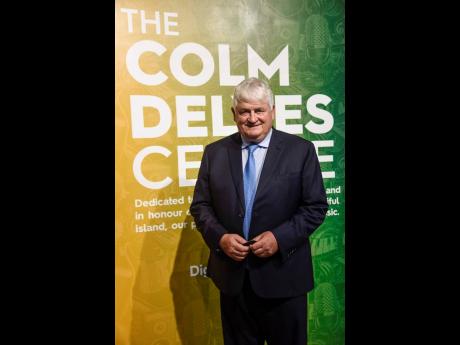 One of Jamaica’s most treasured music institutions, Alpha Institute, has opened a state-of-the-art facility with the goal of training 120 students in performance and technology in the next four years.

The Digicel Foundation sponsored the renovation of the school’s old dormitories to create a dedicated space for students to practise, learn, and access resources.

The renovated building has been named in honour of Digicel’s former CEO, Colm Delves, who passed away in April 2020 after a battle with cancer.

Delves was a known lover of reggae music and spent much of his free time in Jamaica attending live shows and collecting memorabilia.

In her presentation, the school’s administrator, Margaret Little Wilson, said it is anticipated that there will be more opportunities and greater possibilities for the Alpha musical heritage to scale new heights.

“Dreams indeed come true. Today’s activity brings home that truism, especially as the vision of improving our facilities was kept as an ardent desire in the hearts of the team who continue the mission of the Sisters of Mercy and kept alive the prospects of the tradition of music here at Alpha,” she said.

Little Wilson shared that the founder of the Sisters of Mercy was an Irish woman who used her inheritance from a couple to build the very first House of Mercy in 1827.

In 1890, the first Sisters of Mercy arrived in Jamaica, and Sister Mary deChantal started the music programme at Alpha in 1892.

Now, nearly 200 years later, the Alpha School of Music has Delves, an Irishman, as part of its legacy.

She expressed gratitude to the funders, whose generosity has allowed for the reality which gives life to the school song, Upward and Onward.

“Through this amazing gift, we know the musical traditions of Alpha and of Jamaica will continue to benefit the youth and its influence spread far beyond the shores of this island,” the administrator remarked.

Twenty-three-year-old Rohan Mitchell, a producer and band member, has had the opportunity to perform in Boston at charity shows, Reggae Sumfest in Jamaica, and the International Reggae and World Music Awards.

It all started at Alpha, he said.

Mitchell is grateful for the experiences he had during the years 2017 to 2020 at the school which paved the way for his career.

Similarly, Jordan Moncrieffe learnt to play the trombone when he enrolled at Alpha Institute in 2014.

The youngster became a poster student for the institution, particularly because he played the instrument depicted on its logo.

“I am very appreciative of the fact that Digicel has invested in Alpha’s vision to help youths transition from school to work,” said the 24-year-old alumnus.

At Tuesday’s launch, Digicel founder Denis O’Brien said the investment under the education portfolio marked the foundation’s largest spend in a music programme to date.

“Aligning with Colm’s heart for service, this project helps Alpha to continue serving at-risk young men by giving them training in music and other skills,” he said, adding that the institute has served as the incubator for many of Jamaica’s talented musicians.

Digicel Foundation CEO Charmaine Daniels said that Alpha was a natural choice for recognising two of Delves’ big loves – giving back and music.

“This project will impact many of our marginalised young men and give them a passion and a future in the music industry, thus changing their lives forever, while continuing to shape the music of Jamaica,” Daniels said.